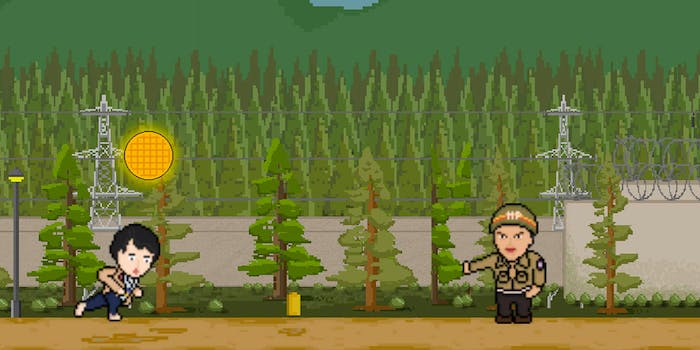 Say goodbye to your afternoon.

After Stranger Things won over audiences with its loving nods to ’80s nerd culture last year, an 8-bit tribute to the show seemed inevitable.

Show creators Matt and Ross Duffer hinted at a retro game in an interview with IGN back in August. Now it’s available to play—and it brought along some friends.

Netflix debuted the browser-based infinite runner a few days ago, giving fans a chance to chose a character from a lineup of Netflix originals: Mike Wheeler from Stranger Things, Pablo Escobar from Narcos, Piper Chapman from Orange Is the New Black, or Marco Polo from Marco Polo.

Each character runs through a side-scrolling setting from their respective shows, and even better, each soundtrack is an excellent retro-gaming remix of the show’s theme song. While Marco Polo from the now-canceled Netflix series is an odd choice, we enjoyed a few rounds of jumping through prison with Piper Chapman and a dense tropical forest with Pablo Escobar. Just hit your space bar to jump (twice to double jump) to pick up items for a power boost or to avoid enemies.

The real star attraction, of course, is the Stranger Things level, where you should definitely play long enough to get chased down by the pixelated but still terrifying demogorgon. Pick up enough power-ups and Eleven appears to give you an assist.

Hope you didn’t need to get anything done this afternoon, because for a simple game it’s pretty addictive.