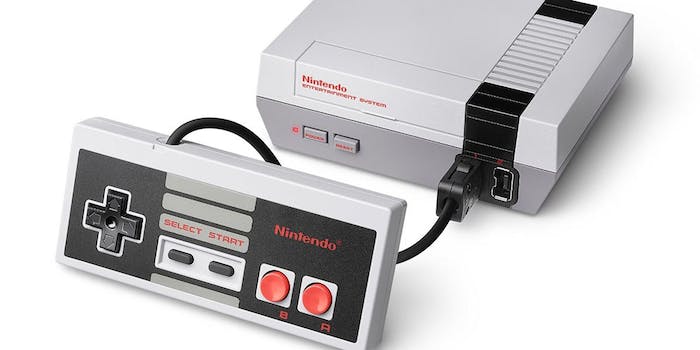 If you don't have one already, you better hurry.

If you didn’t get your hand on Nintendo‘s nostalgia-filled NES Classic Edition, it may soon be too late. Nintendo will be discontinuing the miniature-sized console. The last shipments will head out to retailers later this month.

The NES Classic flew off store shelves this past holiday season. At $60, the package included the console, a controller, and 30 games. It was a great deal: If you had instead purchased an old console off of eBay and got each of those game titles yourself, it would have cost upwards of $600, by our estimates. As of January, Nintendo had sold 1.5 million NES Classics, which originally went on sale Nov. 10.

Unfortunately, Nintendo didn’t expect the NES Classic Edition to be so popular. It had also never meant for it to be a long-term product. In a statement to IGN, a Nintendo representative said:

“Throughout April, NOA territories will receive the last shipments of Nintendo Entertainment System: NES Classic Edition systems for this year. We encourage anyone interested in obtaining this system to check with retail outlets regarding availability. We understand that it has been difficult for many consumers to find a system, and for that we apologize. “

Bummer. If you failed to order an NES Classic by this point, you’ll definitely want to scope out local retailers before the end of the month. After that, you’ll be at the mercy of eBay, Amazon, and Craigslist lords.