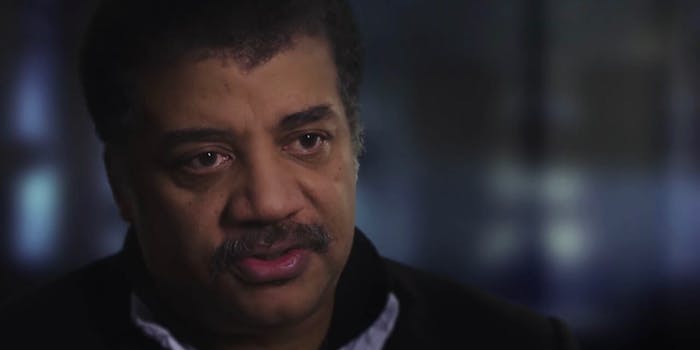 Neil deGrasse Tyson falls over when he takes his pants off, just like the rest of us

It's OK, Neil deGrasse Tyson, we've all been there.

Neil deGrasse Tyson may have gone to Harvard, and sure he has a Ph.D. in astrophysics, but he still puts his pants on one leg at a time like the rest of us, and sometimes, if he takes those pants off too quickly, he falls down. And sometimes he accidentally tweets that information out to his 7 million followers.

No. I have pretty good balance for my body size. But I have fallen over while attempting to quickly take off my pants.

Didn’t intend to send that last tweet to all. Was responding to someone asking if I’d ever fallen trying to remove my T-shirt

As far as embarrassing tweets go it’s not like sending out a dick pic while you’re a member of congress, and in fact most people found it endearing, or even kinda hot.

You are so humble and delightful. #darling 🤗

We’ve all been there, Neil.

After all, there’s really only two reasons to be taking off your pants quickly. One of them is sexy, the other, well… isn’t.

Tyson often uses Twitter to educate the public with scientific facts, but he also isn’t afraid to get political when he’s in the mood.

Show me a Nation with a science-hostile government, and I'll show you a society with failing health, wealth, & security.

Cutting the NEA & NEH to save money on a $3-trillion budget is like thinking 1/3-inch is long relative to a football field.

And for some reason he had 15 tweets suggesting names for Beyonce’s twins.

“Perigee” & “Apogee” – The nearest and farthest points from Earth in the Moon’s oval orbit. #NamesForBeyonceTwins