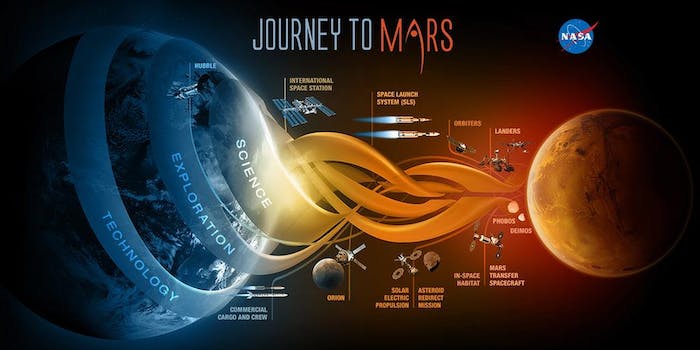 Kids, you might want to start exercising and studying hard if you want to be an astronaut in the first manned mission to Mars that is not a total farce.

The chief of NASA, Charles Bolden, announced yesterday that the space agency plans to send people to Mars sometime in the 2030s. The proclamation was a startling but welcome change from the usual platitudes Bolden made every year prior at the annual Humans to Mars summit, Motherboard reported.

But why should we go to Mars?

“It’s easy to get bogged down into a philosophical debate… ‘Why are we wasting money when we have problems here on earth?'” Robert Jacobs, deputy associate administrator of NASA’s office of communications told the Daily Dot. Jacobs said that technological advances in space exploration have had tangible benefits to life on earth. But more importantly, NASA’s mission is and always has been for the exploration of space.

Jacobs also said that exploration has been the mark of a great civilization.

And the best part is NASA needs your help! Even if you would never in a million years actually be the one to sit in the cockpit of the Mars shuttle, NASA still wants your input in its new crowdsourcing endeavor.

The agency went into a little more detail in a press release:

NASA is embarking on an ambitious journey to Mars and Tuesday announced a challenge inviting the public to write down their ideas, in detail, for developing the elements of space pioneering necessary to establish a continuous human presence on the Red Planet. This could include shelter, food, water, breathable air, communication, exercise, social interactions and medicine, but participants are encouraged to consider innovative and creative elements beyond these examples.

Sending a human this deep into space will present several challenges. First of all, there is the staggering distance to travel (140 million miles). Then you have to protect the astronauts from cosmic radiation melting their brains, make sure they’re properly fed, and are getting enough exercise to keep their muscles from wasting away. There’s also mundane yet herculean challenges like: How do you do their laundry?

Got any ideas? See all of NASA’s crowdsourcing challenges here.