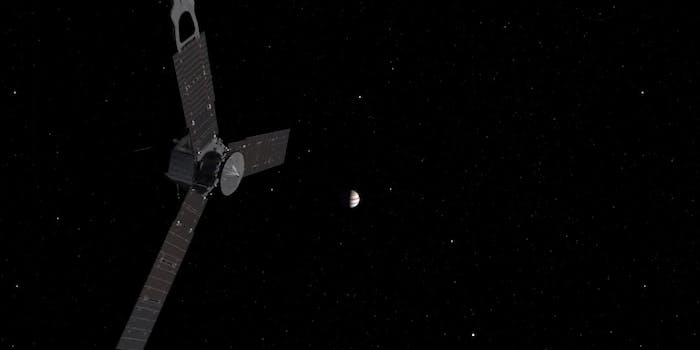 NASA’s Juno spacecraft is now in orbit around Jupiter

For the past five years, Juno has been on its way to Jupiter to observe and send back new information on our solar system’s biggest planet. NASA plans to use the data to analyze and better understand Jupiter’s origins and evolution. Juno completed one major leg of the mission, entering Jupiter’s orbit after a 35-minute engine burn, on Monday at 8:53pm PT (11:53pm ET).

“Independence Day always is something to celebrate, but today we can add to America’s birthday another reason to cheer—Juno is at Jupiter,” NASA Administrator Charlie Bolden said. “And what is more American than a NASA mission going boldly where no spacecraft has gone before? With Juno, we will investigate the unknowns of Jupiter’s massive radiation belts to delve deep into not only the planet’s interior, but into how Jupiter was born and how our entire solar system evolved.”

Juno is operated with solar panels charged by the sun, so once it reached orbit it turned its panels in order to continue receiving that energy.

A time-lapse video from Juno showcases the spacecraft’s journey.

NASA chronicled Jupiter’s descent into orbit on social media and allowed space fans to follow along, with Juno’s Twitter account showing off its personality as it finally achieved orbit. It’s been five years, so it has a lot to celebrate.

Engine burn complete and orbit obtained. I’m ready to unlock all your secrets, #Jupiter. Deal with it.

Here comes the sun. Starting to turn back to sun-pointed attitude. #Jupiter

All rays on me. My solar panels now face the sun. I’m the farthest solar-powered spacecraft from Earth. #Jupiter

The Curiosity Rover offered congratulations to its NASA counterpart all the way from Mars.

Sending you the highest of fives, @NASAJuno. Congratulations on achieving orbit at #Jupiter! pic.twitter.com/aEHmNcbEqs

Juno may have completed one step, but there’s still a long way to go to complete its mission—and NASA will have more data to analyze in the coming months.

“Our official science collection phase begins in October, but we’ve figured out a way to collect data a lot earlier than that,” Scott Bolton, principal investigator of Juno, said. “Which when you’re talking about the single biggest planetary body in the solar system is a really good thing. There is a lot to see and do here.”