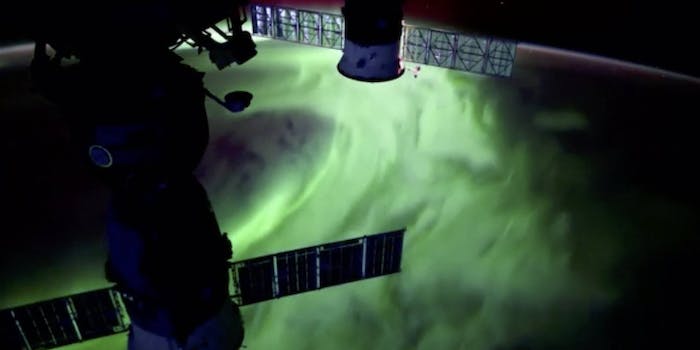 Screengrab via NASA via The Guardian

Check out the northern and southern lights from space

My, what a beautiful planet.

The International Space Station is a pretty cool place to live. It’s a place where you can still get breakfast tacos and experience all the wonders of the world as you orbit the earth. That particular point has been reaffirmed by NASA’s stunning ultra HD video of the northern and southern lights.

Shot in 4K and released as part of NASA’s UHD TV efforts, the time-lapse footage captures both the Aurora Borealis and Aurora Australis. In addition to regularly scheduled footage from the ISS, NASA TV offers educational programming as well as news from facilities around the country.

This out-of-this-world footage is a compelling reason to keep an eye out for what’s going on above this fine planet of ours. Watching the lights dance along the atmosphere is enough to make anyone want to be an astronaut.