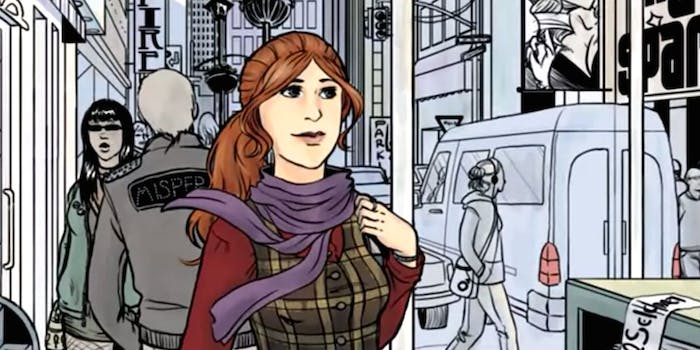 Superhero Cat Daniels can keep fighting with help from her fans.

Over the last year, the comic My So-Called Secret Identity (MSCSI) has tried to change the way women are represented in superhero comics with a story focusing on a woman whose intelligence is her superpower. Since we interviewed creator Dr. William Brooker in January, a fourth issue of the comic has been released for free online. The fate of future issues, however, lies in the hands of fans.

MSCSI launched a Kickstarter campaign this week to fund the fifth and final issue of volume one as well as a print edition of the entire volume. As of Thursday, just four days since it began, the Kickstarter has raised £2,979 of its £8,500 goal. The campaign ends July 15. Previously the comic funded each issue directly through its website, but those funds have been used up.

“It’s incredible that our fans supported us to produce three more issues and Lookbooks based on a single first issue, and I hope we’ve now repaid their initial faith in us,” Brooker told the Daily Dot. “Now we’re having a bigger push for Issue 5 and the print editions, so we’re turning to Kickstarter because of its very helpful structure and template, and the fact that it’s an established, familiar brand.”

According to Brooker, Issue 5 can’t happen unless it’s funded through Kickstarter. If fans continue their loyalty, the future sounds bright. MSCSI Issue 6, the first of the second volume, is already written and is one of the campaign’s rewards. Brooker has plans through the fifth issue of volume two planned out, hoping to explore a lot more ideas from superhero comics.

“Volume one was really about the Batman mythos, overall. Volume two will play with concepts like the Green Arrow/Green Lantern social relevance stories of the 1970s, the big superhero meetings at the start of every Crisis, and the brittle, strange, alien aspect behind Supergirl’s sweetness,” he explained.

As for the protagonist Cat Daniels, Brooker said he’s always had in mind just where she was headed and by the start of this volume she’s changed.

“Her appearance has changed, her style has changed, her body’s changed and her role in the city and community has changed,” he said. “She’s more of an established figure, a kind of local champion. She’s fitter, more outgoing, a bit tougher. At the back of her mind she feels she’s lost something, despite having gained confidence and popularity.”

There’s a lot Brooker would like to write about when it comes to MSCSI. He even has ideas for how volume three would take things to a new level—but the funding for that has yet to be decided. For now, it all depends on fans.