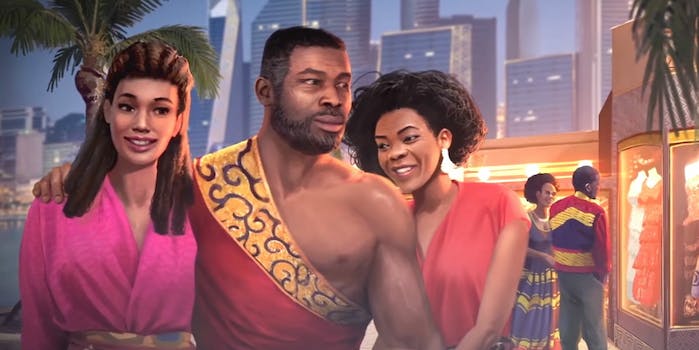 On the surface, you’d think Mortal Kombat 11 would be the quintessential gamer bro’s game. While the series’ 11th installment has somewhat toned down the sexualization, its bloody and gory violence has only been revved up. You can punch a man’s skull through his butthole, after all. Despite the macho leanings, internet commenters are incensed over the end of slavery in one of Mortal Kombat 11’s Tower Mode endings.

A series mainstay since Mortal Kombat 2, Jax Briggs is the leader of the Outerworld Investigation Agency, a cybernetically enhanced brawler, and most importantly for this story, an African-American man. Mortal Kombat 11 sees him fighting against his daughter, thunder god Raiden, and a younger version of himself (thanks to complicated time travel shenanigans) while in the service of villain Kronika. But he eventually comes back around to fight for good.

In Mortal Kombat’s Tower Mode, each character goes through a set number of fights before seeing a non-canonical ending depicting what would happen if they won the Shaolin Tournament.

“I’ve been lucky,” Jax monologues. “My family and I have lived the American dream. But most people who look like me haven’t had that chance. I owe it to them to put things right. I’m not waiting centuries for people to get woke when I’ve got the power to speed things up.”

As Jax continues, players see a shot of Africans being rounded up and put on colonial ships by slavers. Then the image morphs to white Europeans kindly greeting African men.

It would have been simple enough for Mortal Kombat 11 developer NetherRealm to end it there, but to its credit, Jax admits that he doesn’t get it right on his first, second, or even third attempt. So the old man hops back and forth between time periods trying to iron out the kinks of institutionalized racism. Eventually, he seems to figure things out for good. He gets his wife and daughter back, and Earth appears to be a place where people of all races are able to live in harmony.

This scenario is idealistic, and it’s a perfectly puerile way to end a small part of a Mortal Kombat tale. But some folks are reading it to mean that developer NetherRealm is promoting “white genocide,” or reverse racism against white people.

“The guy goes back in time to end slavery of Black people, but in MK universe, Shao Khan has been enslaving people of all skin colors for about a thousand years, but Jax only cares about freeing black people?” one Redditor wrote on r/KotakuInAction.

But there isn’t any indication that NetherRealm is advocating for “white genocide,” like this one YouTuber states. And it’s pretty difficult to make the case that it’s racist to imagine a world where the slavery of Black people didn’t exist.

It’s a ridiculous reaction to an already ridiculous story—and something tells me Mortal Kombat wouldn’t have it any other way. It’s not even the only “controversy” stemming from the release of Mortal Kombat 11. In any case, the game has been receiving generally positive reviews. And there are plenty of tweets dunking on all the angry gamers to lift your spirits.

#MortalKombat11
Jax: The world's a better place for literally everyone after I made sure slavery didn't happen
Greasy white dudes who know they can only survive on misery: pic.twitter.com/YB9cMuwWx2

Angry Dudebros: THE FEMALE CHARACTERS ARE UGLY!!! I WANT A HARD-ON WHILE I PLAY!!! AND OH MY GOD, JAX UNDID SLAVERY?!?!?! HOW RACIST!!! NetherRealm NEEDS TO UNDO THIS!!