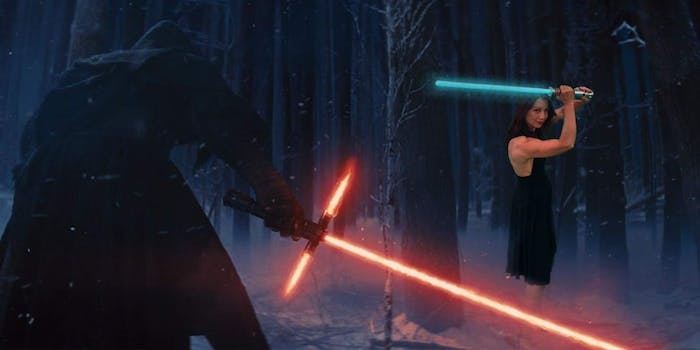 How ‘Agents of S.H.I.E.L.D.’ actress Ming-Na Wen came to appear in ‘Star Wars’

This Photoshopped fanart will make you wish Ming-Na Wen had a role in 'Star Wars.'

Agents of S.H.I.E.L.D. star Ming-Na Wen is, as they say, one of us. She’s been embedded in geek culture for the better part of a decade, starring in the Batman animated series and Stargate: Universe before joining the throng of Marvel Studios cast members.

Wen may not be in Star Wars (yet), but this weekend she provided the perfect tool to imagine her as a Jedi knight. Posting a photo of herself holding a lightsaber in front of a green screen, she asked fans to Photoshop her into the world of Star Wars.

Fans have replied with all sorts of scenarios, from ominous Sith poses to the middle of the final lightsaber battle in The Phantom Menace.

@MingNa @starwars You'd be surprised what you can do with PowerPoint when you're bored at work: pic.twitter.com/WN1A9l0fDc

Wen looks more intimidating in a black cocktail dress than most people would in full body armor. Surely there’s room for her in one of the upcoming Star Wars movies, right?