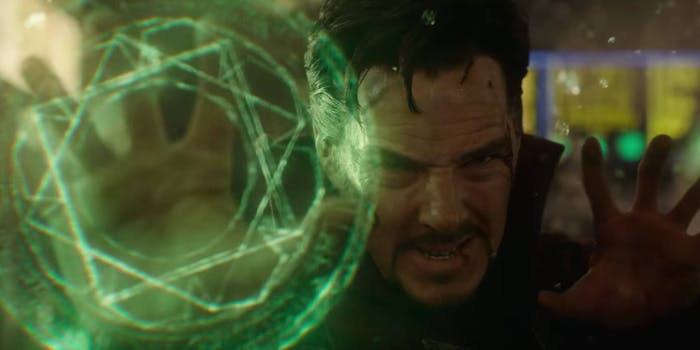 The Marvel panel was huge, featuring new trailers, tons of casting announcements, and an update from 'Spider-Man: Homecoming.'

As always, the Marvel movie panel was one of the biggest at San Diego Comic Con. With an emphasis on new franchises like Black Panther, Doctor Strange, and Spider-Man: Homecoming, it truly felt like a brand new phase for the studio.

The panel aired several trailers and sizzle reels (some of which weren’t posted online, unfortunately), along with an army of celebrity guests and lots of updates from behind the scenes. Here’s everything you can currently view online, beginning with the new Marvel Studios logo!

Thor: Ragnarok director Taika Waititi teased the humor of this movie with a faux-documentary clip from Chris Hemsworth as Thor. He also revealed the film’s logo, which has an ’80s arcade game vibe. Ragnarok is in production right now, so they were able to share a sizzle reel of new footage including the Hulk (who will play a major role in this movie), Loki, and a new throne room in Asgard. It’s good to hear the Thor franchise is going in a more comedic direction, especially after Hemsworth’s brilliant turn in the new Ghostbusters.

The presence of Spider-Man: Homecoming was a welcome surprise at the Marvel Studios panel, including a John Hughes-esque montage of high school Spider-Man scenes, plus some new casting updates.

As fans already know, Homecoming has a promisingly diverse cast with far more characters than you’d expect from a solo movie. Zendaya was revealed to be playing the classic Spider-Man character Liz Allan, Tony Revolori is Flash Thompson, and Michael Keaton is playing the villainous Vulture—a rapid turnaround from his Oscar success in Birdman, a film about a washed-up superhero actor.

Black Panther had one of the most exciting lineups of the Marvel panel, confirming Lupita Nyong’o‘s casting, alongside the surprise introduction of Danai Gurira, The Walking Dead‘s Michonne. Gurira is playing Okoye, the leader of the Black Panther’s personal guard, Lupita Nyong’o is playing Nakia, a familiar character from the Black Panther comics, and Michael B. Jordan is the antagonist Erik Killmonger. They start filming in January.

With Doctor Strange coming out in a few months, this was obviously one of the headline acts of the Marvel panel. Benedict Cumberbatch took to the stage alongside Benedict Wong, Mads Mikkelsen and Tilda Swinton, who briefly touched on the Ancient One racism controversy by saying, “The truth is, any of us can be the Ancient One.” Then the audience got another SDCC-exclusive clip, along with the new trailer posted above.

Guardians of the Galaxy Vol. 2

The Guardians of the Galaxy cast showed up in force for SDCC, sharing the news that the film is getting a Disney theme park ride. However, the most important update was the identity of Star-Lord’s father, played by Kurt Russell. He’s playing Ego, also known as “the Living Planet,” an incredibly powerful and appropriately bizarre Marvel character who gave himself human form—and ended up impregnating Star-Lord’s mom. Sylvester Stallone will also appear in the film, apparently playing a member of the spacefaring police force the Nova Corps.

The final act of this action-packed panel was the introduction of Oscar-winner Brie Larson as Captain Marvel, who will hopefully make her debut in the upcoming Avengers sequels before her solo movie comes out in 2019.

With this kind of lineup, it’s safe to say the Marvel Studios panel conquered SDCC once again.