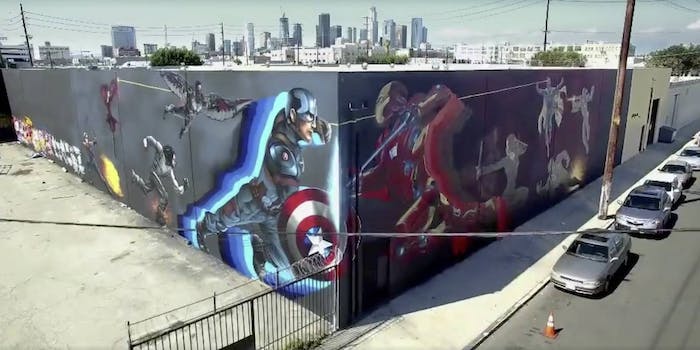 The mural came together in under 72 hours.

Captain America: Civil War has hit theaters abroad to massive acclaim. With hype for the movie’s upcoming U.S. release hitting a fever pitch, Marvel continues to up the ante. The comic behemoth released time-lapse footage of a massive mural being completed in Los Angeles on Sunday.

The work of art commemorating the film was created by 10 prominent graffiti artists, who worked at breakneck speeds to turn the project into a reality. Covering two sides of what appears to be a warehouse in Los Angeles, the work of art came together in less than three days.

According to a photographer who worked on the project, the footage released by Marvel was a combination of time-lapse techniques, virtual reality, and live shots.

Many artists involved in the project had previously taken to Instagram to post photos of the work as they were rushing to complete it. A majority of these shots highlight the gargantuan size of the mural, which saw artists riding on scissor lifts as they spray-painted iconic superheroes like Iron Man, Captain America, and Black Widow.

Expect a slew of selfies at the mural as fans seek to find its exact location. Let’s hope it includes a shawarma place.