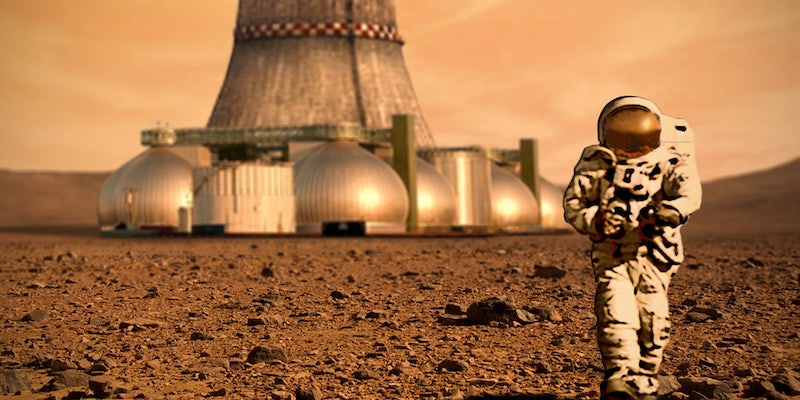 Mars One mission chooses its 100 finalists

If Mars One goes according to plan, four of these 100 applicants will be the first human colonists on Mars.

The Mars One project has narrowed down its list of applicants to 100 people, who will now go through further training before the final team is selected.

More than 200,000 people applied to Mars One in 2013, hoping to be chosen to colonize Mars. Applicants had to be at least 18 years old, healthy and between 5’2″ and 6’3″ tall, as well as fulfilling various personality requirements such as exhibiting adaptability, resiliency, and resourcefulness. During the next round of the selection process, the number was whittled down to 660 during a series of interviews and tests, while the next round will give the remaining 100 people a chance to train in teams in an earthbound copy of the future Mars outpost.

The plan is to film the final Mars One training period for a reality TV show, although there’s already been a predictable amount of interest in the candidates. Last week the Guardian released a mini-documentary interviewing three of the applicants, pointing out the intrinsic strangeness of applying for a one-way trip to Mars—an incredibly dangerous mission that will, at best, result in extreme social isolation. Only one of the three people interviewed by the Guardian has made it through to the next round: English physicist Ryan MacDonald, who vlogs under the name MartianColonist. He filmed himself reacting to the news that he’d made it into the final 100.

Mars One also released a trailer for the next round of the selection process, ending it with, “Coming soon to a screen near you.” However, the planned TV series does not appear to be in production yet, so “soon” may be something over an overstatement.

The real training begins this year, although only an estimated six teams of four will make it to the final stage. These teams will continue training until the planned launch date in 2024, with the final four candidates being chosen by the general public. As the Mars One site explains, “Because this mission is humankind’s mission, Mars One has the intention to make this a democratic decision. The whole world will have a vote which group of four will be the first humans on Mars.”

Mars One is the brainchild of Dutch entrepreneur Bas Lansdorp, and is funded through a combination of corporate sponsorship, crowdfunding, merchandising, and (in theory) profits from the resulting reality TV series and any new technology developed during the mission. It’s already received a fair amount of criticism from detractors who think the mission schedule is unrealistic, but even as a social experiment it’s fascinating to watch. The idea of a televised contest to go to Mars is a compelling example of science fiction becoming reality.