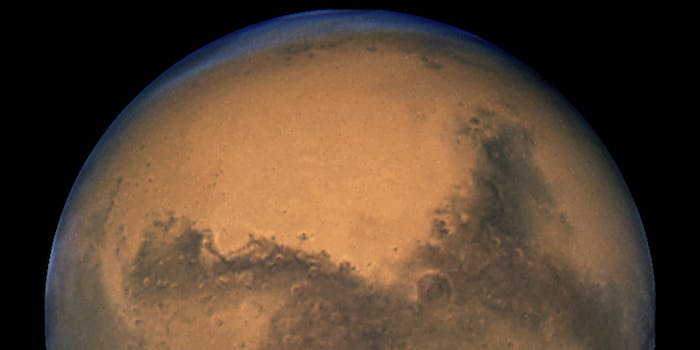 If you’ve been on Facebook lately, you may have seen this meme floating around: 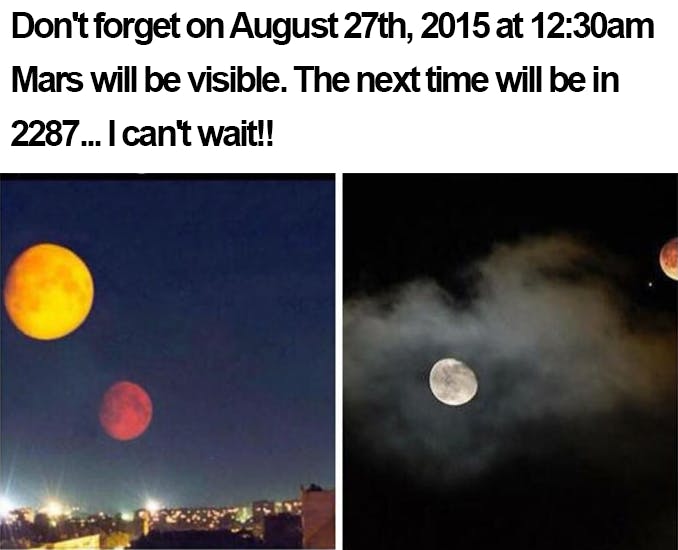 In case it’s not obvious, this meme is a hoax. And, interestingly, it’s not the first time this hoax has appeared on the Internet.

In 2005, when hoaxes were mostly circulated via chain email, a message made the rounds that read:

The Red Planet is about to be spectacular.
Earth is catching up with Mars [for] the closest approach between the two planets in recorded history.
On August 27th … Mars will look as large as the full moon.
NO ONE ALIVE TODAY WILL EVER SEE THIS AGAIN.

According to an old branch of NASA’s website, the meme was likely started after astronomers said that Mars would be passing close to Earth… at about 43 million miles (69 million km).

The moon, by comparison is an average of 233,986 miles away. (That varies as the moon’s orbit is not a perfect circle about the Earth.)

But how close would Mars have to get to look as it does in the photos above? On one of Reddit’s most amusing and educational subreddits, /r/theydidthemath, several redditors pitched in to try and reason it out.

So no one alive will ever see Mars that close to Earth ever. But don’t dismay! If the red planet were that close to Earth, it would not be fun for anyone. According to the same NASA webpage, at such a proximity Mars would alter Earth’s gravity and cause monster tides.

However, Mars is visible in the early morning in the late summer months. Just before the sun comes up, you can spot it shining bright in the eastern sky.