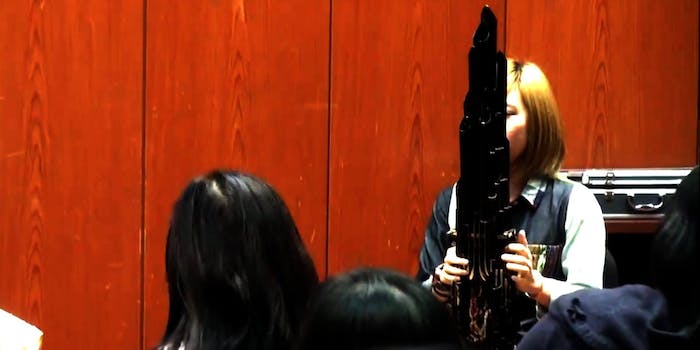 You can even hear Mario gobble up a mushroom.

It’s fair to say that whoever invented the sheng, an ancient Chinese wind instrument, had no concept of 8-bit Italian plumbers. The golden era of the NES would come a good, oh, 3,000 years in the future, after all. So it’s kind of amazing how perfectly the instrument can mimic the chiptune sounds of the classic video game score.

Here’s a performer at a recent concert in Taipei, Taiwan, tooting out the theme from Super Mario Bros with what looks a mini gothic cathedral strapped to her face. And we’re not just talking about music. Just close your eyes and listen to the performance. You can hear Mario snatching a mushroom before collecting a whole string of coins.

The resemblance is uncanny, but don’t get too caught up in the magic. It’s not as if, right before the performance, this particular instrument was dug up straight from the tombs of an ancient Chinese emperor. While the sheng is indeed “ancient,” in the sense that variations have existed for thousands of years, modern versions of the instrument can boast all manner of modifications. It could be, as Slate’s Ryan Vogt writes, that this sheng was altered specifically to sound like 8-bit music. That would be a pretty cool achievement in-and-of itself. But it’s not as if your average village concert in ancient China sounded like some hipster chiptune show.