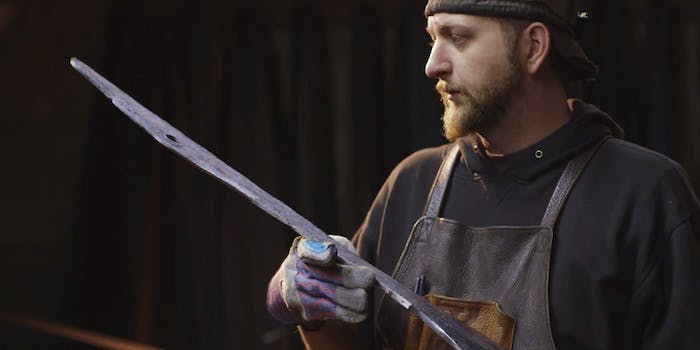 A scissor blade made with actual scissors? You've never seen a weapon like this.

Monday, however, the Man at Arms crew took on what is undoubtedly their biggest challenge yet: creating a real-life version of the infamously hardcore half-scissor blade from controversial anime Kill La Kill.

Here’s a taste of the bright red sword, seen in “decapitation mode,” as used by Kill La Kill‘s main character Ryuko. (This video might not be safe for work, depending on how cool your workplace is with anime heroines wearing all-but-nude body armor as they fight battles to the death.)

Ryuko’s weapon is basically one half of a pair of scissors, scaled up considerably. You wouldn’t think this would be the kind of weapon that translates well to real life, but that’s where Man at Arms comes in.

Swordsmith Matt Stagmer and armorer Ilya Alekseyev decided to melt down a bucket full of actual steel scissor blades in order to make their weapon. The result, once they’ve steadily hammered the blade into shape, is pretty incredible: