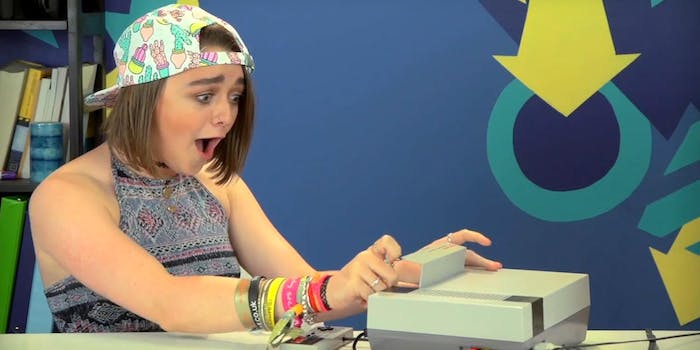 Maisie Williams and other teens react to an original Nintendo

Not even 'Game of Thrones' star Maisie Williams knows what a cartridge is.

Gaming was so much simpler back in the day, but kids these days just don’t appreciate it. All they care about are their fancy Xbox One’s and Snapstagrams.

As proof, the Fine Brothers have thrown together a new “react” video that will make you feel downright elderly. They put teenagers in front of an original Nintendo Entertainment System, better known as an NES, and let them have at it. These youngsters, who are between the ages of 15 and 19, act as if they’ve never seen a cartridge before.

READ MORE:
Old people have no idea what to make of Google Glass

But this isn’t just any group of teenagers. Maisie Williams, who plays Arya in Game of Thrones, makes a star appearance in the episode because, you know, she’s a teenager too. You can tell because she’s wearing a backwards cap.