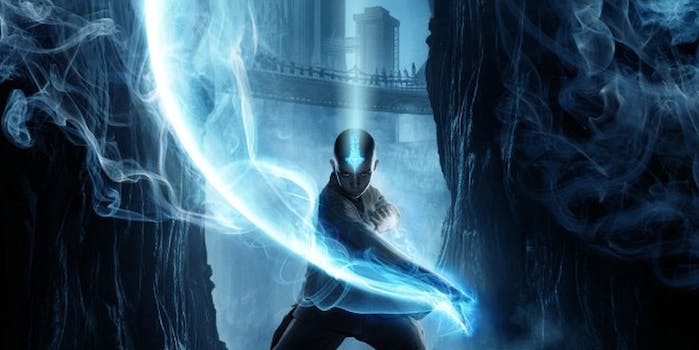 M. Night Shyamalan says ‘The Last Airbender’ flopped because adults didn’t get it

Paramount’s 2010 film adaptation of Avatar: The Last Airbender will live in infamy as a notorious failure, for a bunch of reasons that have everything to do with the clueless, infuriating, and offensive comments director M. Night Shyamalan just made in an interview with IGN.

IGN, meeting with Shyamalan to discuss his new Fox suspense series Wayward Pines, politely asked him for his thoughts on why The Last Airbender bombed at the box office and bombed even harder with fans and critics.

Shyamalan responded with a long ramble in which he insists the film he made was for 9-year-olds, inexplicably compares the Avatar franchise to Transformers, and mentions Megan Fox three times:

“It’s really weird because on the show the average age was, like, nine-years-old,” the director said. “My child was nine-years-old. So you could make it one of two ways. You could make it for that same audience, which is what I did — for nine and 10-year-olds — or you could do the Transformers version and have Megan Fox. I didn’t do that. That would have felt like, ‘Well, I’m going to make a movie about a kids show that my 10-year-old is watching and not make it for her. I make it for my guy friends.’ That felt like a betrayal of the innocence of the piece… Those kids, it’s for them. It was for them, to talk about mysticism and Eastern philosophies through a 10-year-old’s vernacular.”

Sorry, M. Night. We have to stop you right there, because none of these things have jackshit to do with why your movie failed. It failed because it’s racist as hell. The Last Airbender was racist and everyone knew it, because the core fanbase that should have been avidly promoting it was instead telling friends to avoid it.

Here is a quote from a previous Daily Dot article summing up the history of controversy surrounding Shyamalan’s disastrous film:

In 2008, M Night Shyamalan’s film adaptation of the series, The Last Airbender, caused massive unhappiness from almost everyone involved with the original production, as well as countless fans worldwide. At issue was the production’s choice to search only for white actors to play most of the main cast and to obliterate the carefully researched, separate ethnic identities of the four fictional nations at the center of Airbender’s epic three-season plot—none of them white.

Everywhere the beleaguered production held a casting call, AtLA fans showed up by the hundreds to protest the casting decisions. The website Racebending.com, borrowing a term from the series, began as a media site to publicize the fandom’s attempts to get the film production to reverse its decision and steadily grew into a watchdog for Hollywood whitewashing and other issues of race. The word “racebending” itself became a mainstreamed term to talk about erasure of ethnic identity in the media.

Meanwhile, members of the original animated series distanced themselves from the Paramount film. But although the controversy raged and spread, igniting and uniting the AtLA fandom in outrage, Shyamalan’s production went ahead as planned, only to be universally panned when it finally premiered in 2010.

Avatar franchise creators Michael Dante DiMartino and Bryan Konietzko, along with the vast majority of fans, prefer not to acknowledge that the film adaptation even exists. The Racebending website has since become a crucial part of online call-out culture’s work of critiquing Hollywood whitewashing.

Even if Shyamalan’s attempt to film “mysticism and Eastern philosophies through a 10-year-old’s vernacular” hadn’t been sabotaged by his own terrible writing, inexplicable direction, and abysmally slow plotting, his film was doomed from the start. By the time Avatar landed in theatres, fans were actively telling their friends and families to avoid it, nearly all of the film’s reviews were mentioning its racism, and reviewers who were also fans were having an apoplexy, much like I am now as I write this.

Prior to the film’s 2010 release, Shyamalan, in a now-offline interview with India Movie Online, took full responsibility for the casting, while issuing a defensive “I’m non-white, therefore this film can’t possibly be racist” screed that added fuel to the film’s firestorm of controversy.

“I had complete say in casting,” he said. “So if you need to point the racist finger, point it at me, and if it doesn’t stick, then be quiet.”

Shyamalan’s directly responsible for taking a beautiful, multicultural series, one predicated on respect for non-white cultures, and adapting it in a way that fundamentally disrespected and erased those cultures. The film undermined the entire point of the series he claimed to have respected. His comments to IGN are irresponsible and offensive, and by failing to even mention the controversy his casting decision caused, he made everything awful all over again.

It would be hard to overstate how influential Airbender and Legend of Korra have been in the world of children’s storytelling because of their commitment to diversity and progressive worldview. The fact that five years later he’s still speaking of the film’s failure as a misunderstanding, as if viewers were confused about the fact they were watching a children’s movie, underscores how fundamentally he misunderstood his own source material. It was never about indulging children’s fantasies. This is a series that dealt with war and genocide.  Avatar wasn’t about preserving “innocence.” It was about showing children how to grow into peaceful adults who didn’t perpetuate war or cultural erasure.

He missed an incredible opportunity to broadcast that message to an even wider group of children, on an even bigger screen. Instead, he and Paramount sent them the message that white faces are the only ones that can be heroes and save the world.

He made an objectively terrible film, but fans would still have supported it, even with all its obvious flaws, if Shyamalan hadn’t bastardized the source he was meant to honor—a source we loved because it was everything his awful, ugly, racist movie wasn’t.

That’s why we hate your film.

Photo via sanwatanabe/Flickr (CC BY 2.0)