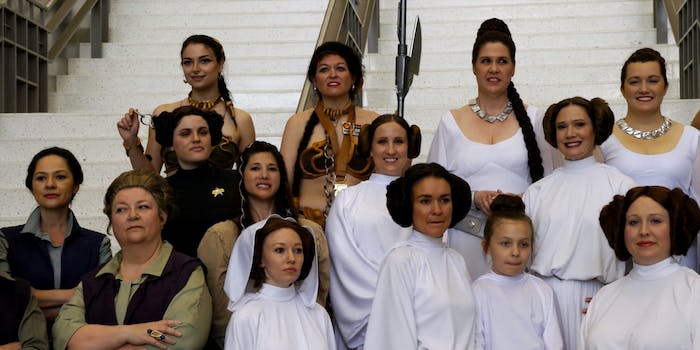 What Do We Want Films/Vimeo

The documentary celebrating the women of the 'Star Wars' fandom is coming to a galaxy near you.

The documentary about women and girls who love Star Wars wants to show just how vast the fandom truly is by converting its format into a lengthier docuseries.

Looking for Leia creator Annalise Ophelian has created a crowdfunding campaign on Seed & Spark to raise funds to cover the new format of her project, which she said will now be a series consisting of six episodes.

The docuseries will explore the culture of Star Wars fandom through the lens of women, who have been a “substantial presence in the global phenomenon of Star Wars fandom since its debut in 1977, but have gone largely unrecognized until recently,” according to the campaign’s page.

In an interview with SyFy Wire last year, Ophelian said she had enough material for “several feature films” worth of female experiences in fandom, which explains why she decided to change up the format. The series will explore many facets of the fandom, including but not limited to droid builders, cosplayers, saber guilds and convention goers, women using Star Wars in the classroom, women in STEM, fan fiction writers, collectors, and multi-generational fan families.

“The cultural implications of women in science fiction and fantasy genre and women’s media representation in these genres is discussed by cinephiles, psychologists, scholars, artists, and authors,” the campaign said. “The series reaches far beyond the legacy of Leia to examine how stories of women’s fandom speak to experiences of gender resilience and resistance.”

The campaign also gives fans a preview of the upcoming episodes. Episode 1 plans to give a history of the fandom, episode 3 will highlight women who work with building droids and in STEM, and episode 6 will explore how Princess Leia became the symbol of protest for women against Donald Trump.

The campaign has until April 20 to raise $25,000, which will be used for music licensing, hiring animators for B-roll footage, legal fees, and more. It will also be used to further invest in the documentary’s mission to hire an almost entirely women-filled production and post-production crew.

So far, the campaign has raised $9,500. Fans who donate receive different awards based on the amount they donate, including a social media shoutout, stickers, a patch, a link to view the series, enamel pins, and a mystery box of vintage and new Star Wars goodies.