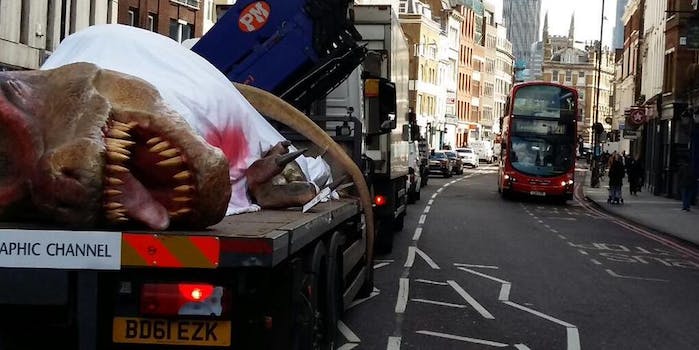 Amazingly, this stunt had nothing to do with 'Jurassic World'.

If you spotted a Tyrannosaurus rex corpse stuck in London traffic this morning, you weren’t imagining things. A life-size replica dinosaur was traveling across the city on a flatbed truck, and it didn’t have anything to do with Jurassic World.

The city’s official traffic news Twitter account was one of the first to post a photo of the replica dino, showing its body partially hidden by a blood-stained sheet.

More photos began to appear as people noticed the T-Rex truck, which turned out to be a marketing stunt for National Geographic.

@958capbreakfast T.rex on the loose. Think it's heading to central london! pic.twitter.com/MNtnNF7Bmx

Phenomenal bit of PR from @NatGeo on my road this morning! #TRex #Dinosaur pic.twitter.com/NV3cQrM2Q4

You’ve got to admit that it was an effective PR trick. There’s nothing like the sudden appearance of a dinosaur to liven up everyone’s Monday morning.