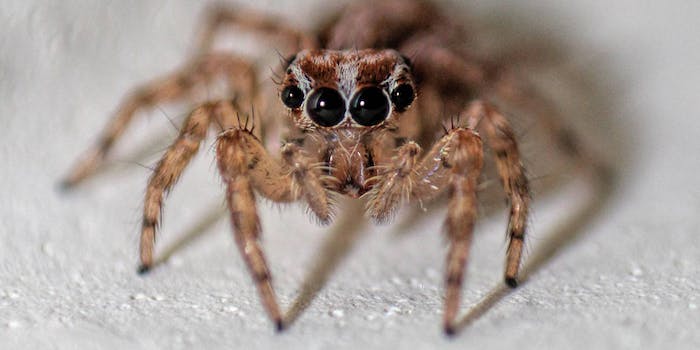 Rapper Lil B is sort of right about spiders

We know at least some species can remember 'locations and things.'

California-based rapper Lil B (also known as The Based God) is known to tweet a thing or two. On Sunday, he tweeted an interesting note about spiders based on his personal observations:

Putting aside the fact that spiders are not insects (they’re arachnids), we at the Daily Dot were wondering if it’s true that spiders really do remember locations and things.

The concept isn’t totally ridiculous. Scientists know goldfish, for example, have memories that last way longer than six seconds. We also know that even the humble fruit fly may experience simple emotions—from nothing to arousal, or, “meh,” to “oh!”

After some Googling, we found a National Geographic story from earlier this year of a study that found jumping spiders can plan ahead and remember the location of food items. Researchers placed spiders atop a platform where they could look down upon an obstacle course that led to two boxes: one that contained tasty spider food and the other one that contained gross, disgusting leaves.

But once the spiders began to walk through the obstacle course, they could no longer see which box contained the food. So they had to remember the correct path to get to the meal.

The authors noted to National Geographic that this study built upon an existing body of knowledge of the cognitive capacities of jumping spiders specifically. So it’s unclear if different types of spiders are capable of the same levels of thinking but something tells us that Lil B may be onto something.