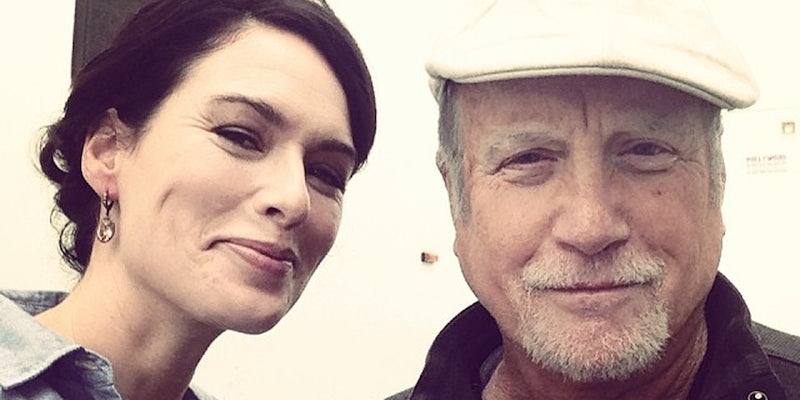 Did Lena Headey confirm a ‘Game of Thrones’ spoiler?

Lena Headey posted a seemingly innocent photo to Instagram—but is it a major spoiler of things to come?

Warning: This article contains spoilers for A Storm of Swords and upcoming episodes of Game of Thrones.

Lena Headey might have revealed one of the biggest twists in Game of Thrones to her Instagram followers—and hardly anyone noticed it until now.

The photo itself, posted on April 21 by the show’s Cersei Lannister actress is innocent enough. It’s a grouping of rocks shaped into a heart with the caption, “My stone heart.” It looks like something that’d appear on Pinterest or Tumblr.

However, it could be a reference to a character that appears in the closing pages of A Storm of Swords (and highly suspected to show up at the end of Game of Thrones’s fourth season). It might just be the most anticipated character introduction—or return, depending on how you feel—in ages, if it’s actually happening.

The name of Lady Stoneheart probably won’t ring any bells to show viewers (unless they’ve seen the acronym LSH floating around forums), but it’s a huge reveal for the people who’ve read ahead, and it’ll be a huge shock for those keeping pace with the show.

Because Lady Stoneheart isn’t a new character. She’s Catelyn Stark, who we last saw die at the Red Wedding last season, out for vengeance. Catelyn did in fact die, but she was later brought back to life off-page by Thoros of Myr and the sacrifice of Beric Dondarrion, who gives his life to resurrect Lady Stark. It’s very likely that season 4 could end with a shot of Lady Stoneheart (and Game of Thrones is known for dropping one final twist at the end of a season).

There have been no reports that Michelle Fairley, who played Catelyn, has been anywhere near a Game of Thrones set since she filmed her final scene last season, but the creators managed to keep Jason Momoa’s cameo in season 2 a complete secret until that episode aired, so it’s possible that Fairley’s involvement was kept a secret as well.

The speculation went into overdrive after HBO accidentally listed a White Walker by name of a character deep in A Song of Ice and Fire lore in an episode synopsis, so now that the photo is getting around, there will be no stopping the fandom, who won’t be getting a new episode this week.

Even if the stone heart was just a really tongue-in-cheek coincidence, there will be plenty of fans disappointed if that final twist is kept out of the show.