How the early version of Lego Worlds compares to Minecraft

Lego Worlds is not going to be a Minecraft-killer.

It sounds beyond belief to me, so I decided to do some investigating in the Early Access version of Lego Worlds now available on Steam.

Almost immediately, headlines touted the game as a direct competitor to Minecraft, but when I jumped into Lego Worlds, I found a game that doesn’t resemble the sandbox juggernaut much at all.

The game will appeal to some Lego fans who are willing to deal with complexity, but the idea of Lego Worlds ever competing with Minecraft for the concerted attention of its massive, young audience seems far-fetched, at best. 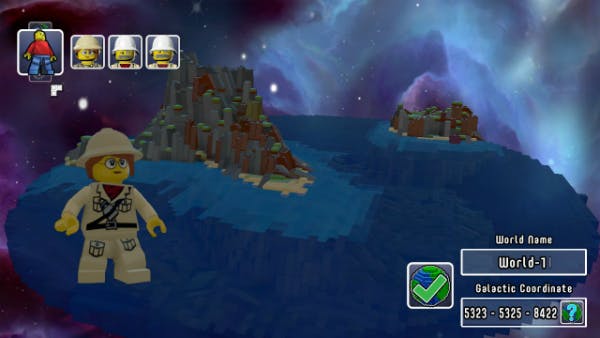 I’ve found no shortcuts (other than the water) in terms of making sure that everything in the Early Access version of Lego Worlds is built out of the same bricks we buy in Lego sets. The terrain in Lego Worlds is generated procedurally—as is the terrain in Minecraft—meaning there’s a program under the hood that determines the shape of the terrain and then builds it out of Lego blocks. This is fantastic.

Right off the bat I had access to what felt like all the different kinds of Lego blocks in its catalogue, along with a palette of colors for the blocks. I have no doubt that I could take an instruction booklet for any Lego set and literally follow the directions brick-by-brick in Lego Worlds, and arrive at the same result I arrive at with the real-life construction set.

It’s not easy, however. The user interface and options that dictate how you place blocks could be streamlined between now and the final release, and I think it would be in the best interest of developer TT Games to do so. I can’t imagine that the level of complexity with which you can currently build objects in Lego Worlds is going to change markedly.

The ability to play with virtual Lego to this degree, something that would require the purchase of enough bricks to break the bank in the real world, will probably be a huge draw for the Lego fandom. The way you build in the current version of Lego Worlds is vastly different than how you build in Minecraft, and this alone makes me wonder if Lego Worlds is already appealing to an demographic considerably different than the Minecraft audience. Accessibility, after all, is a huge factor in Minecraft’s success. 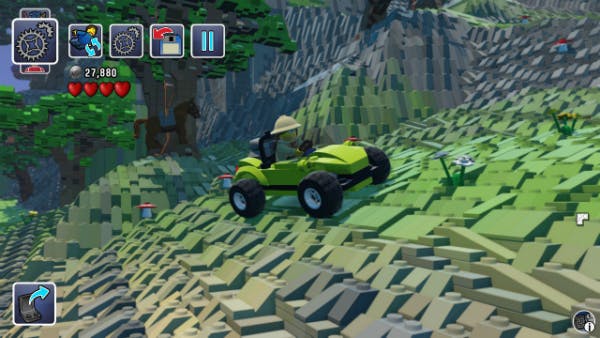 Playing Lego Worlds in Early Access is about getting a handle on its basic structure, and so far there is nothing that feels even remotely like Minecraft’s Survival mode, in which monsters appear out of the darkness every evening and are present in mines at all hours of the day.

I’ve found skeletons in Early Access Lego Worlds that scream a lot and chase after me, but the dragons tromping around don’t seem to care about me whatsoever, nor did the wizards I found floating around a lava flow. Something akin to Survival mode is undoubtedly being developed by TT Games, and it will become one of the huge patches to the game between Early Access and the final, retail version.

If that does not prove to be the case—if the sense of freeform adventure created by Survival mode is not present in Lego Worlds—it won’t even be fair to Lego Worlds to put it in the same category as Minecraft. Something akin to Survival mode is the number one thing to look for as the development of Lego Worlds proceeds.

Survival mode has moments of triumph where you discover the rare material you needed to finish whatever project you’re working on, or when you live through a run through The Nether, dodging fireball-launching Ghasts to grab a material only available in that alternate dimension. Not being killed by a Creeper blast is exhilarating, though seeing the damage done to your house or other construction is the worst. Survival mode is like first creating the Lego brick you need for building, and it’s fraught with risk.

The way exploration works right now in Lego Worlds revolves around discovering new objects in the world. The first time you encounter anything, a type of bush, a minifigure person, or a vehicle, that object is added to the panoply of pre-built objects you can place into the world. Even in Minecraft’s Creative mode, everything still needs to be built. There are no pre-set objects. Building everything block-by-block in either Survival or Creative mode is a huge part of the fun. 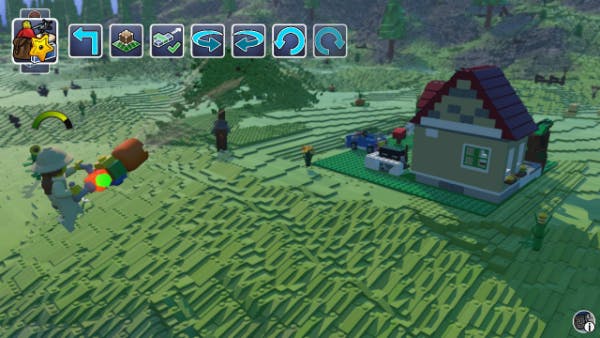 Spray-Legoing a house into existence.

The Early Access version of Lego Worlds, on the other hand provided me with a Lego “set” (the icon in the interface literally looks like a Lego set you’d buy off the shelf) that I could drop into the game world: a house that comes complete with trees and a mailbox and a tiny swimming pool and even a car. Lego Worlds immediately became more like Cities: Skylines, than like Minecraft.

Placing individual objects in Lego Worlds is limited by how much Lego stud currency the player owns, and collecting studs works in the same way it does in any other Lego title developed by TT Games. Punching or otherwise destroying objects generates Lego studs for the player to collect. I certainly hope this does not remain the primary limitation for how many objects you can place, because the idea of walking around punching trees for Lego studs sounds awful.

Everything you sees in Lego Worlds right now is subject to change. The point right now is only to show off the basics of how the game is going to work, in order to whet consumer appetites. Even at this early stage, however, I feel the question I broke my personal prohibition against often buggy and incomplete Early Access games to seek has been adequately answered.

No, Lego Worlds is not going to threaten the domination of Minecraft. It’s already a very different game than Minecraft, and while the idea of a new game challenging the supremacy of Minecraft might make for sexy headlines, it’s also an incredibly lazy narrative. For years writers have theorized whether a new MMORPG is going to unseat World of Warcraft, looking for a WoW-killer. It hasn’t happened yet, and thankfully this is an idea one rarely reads about in the press anymore, because it got boring.

I similarly don’t expect any game to ever challenge Minecraft’s position at the top of the construction game pyramid. The result of looking for a Minecraft-killer will be a lack of full appreciation for what Lego Worlds will eventually accomplish—being the game Lego fans always wanted—simply because it failed to knock off Minecraft.