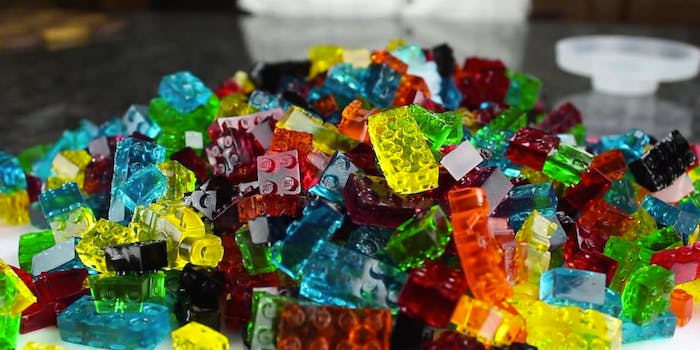 How to make your own Lego gummy candy

From bricks to minifigures, you can turn them all into candy.

What’s better than the endless fun of Lego? Edible Lego.

Thanks to Grant Thompson’s YouTube channel, The King of Random, you can add Lego bricks and figures to your snack menu as well.

In Thompson’s latest video, he provides a recipe for creating Lego gummy candy using Jell-O, corn syrup, and unflavored gelatin. He goes through each step and demonstrates a few different ways you can make the candies.

This isn’t the first time Thompson has tried making Lego candy. He writes in the video’s description that five years ago he created a Lego gummy video before he became serious about his videos. He removed it in 2012 intending to make a better version.

“I played around with loads of variations in recipes to see what texture and tastes I liked the best. And I’ve kept experimenting off and on for the last 4 years, using my kids and wife for feedback. They gobble them up no matter what variations I use, but I’ve finally settled on 1/2 cup of very cold water, 1/4 cup of corn syrup, 2 packets of unflavored gelatin, and 1 pack of Jell-O. I’ve found that the corn syrup seems to help smooth out the texture and the taste,” he writes.

You can read more about the candies’ creation in the video description and see more of Thompson’s work on his YouTube channel.