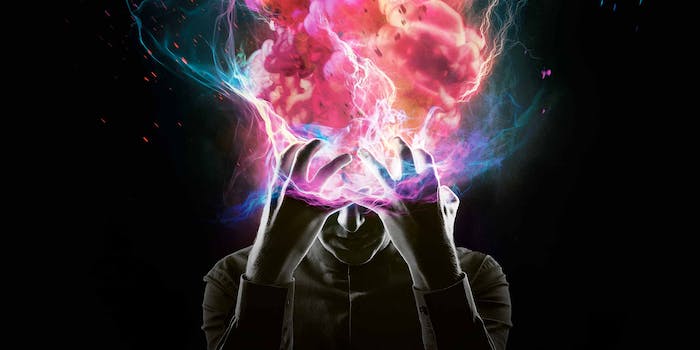 ‘Legion’ is getting interesting.

After two episodes of intentionally surreal confusion, Legion’s third chapter brings us to more familiar territory. Steely cult leader/Professor Xavier stand-in Melanie Bird confirmed what was already obvious from the start: David Haller has unprecedented psychic abilities, and she wants to harness his powers for her mutant uprising.

In Melanie’s ideal world, David is destined to become a classic (one might even say cliched) reluctant hero. The only obstacle is his need for therapy, which was the main focus of Chapter 3—and, arguably, the entire show. Melanie is convinced that his schizophrenia was misdiagnosed, but his hallucinations show no sign of abating. It’s increasingly clear that there’s no easy solution to David’s problems, and Melanie is blinded by her desire to make him function as a weapon.

Legion is stylish enough that it can get away with episodes where virtually nothing happens. This one revisited a lot of the memories we already saw last week, but while Melanie and the “memory artist” Ptonomy are blocked from accessing significant moments in David’s past, his girlfriend Syd can travel freely through his mind, at one point literally embracing his inner child. She also gets to see some of his hallucinations, possibly as a lingering effect of their body-swap in episode 1.

Alongside Mr. Robot, Legion belongs to a new generation of surreal dramas influenced by Bryan Fuller’s Hannibal, another stylish show about mental illness with an unreliable narrator. Showrunner Noah Hawley spoke about his love of Hannibal while working on Fargo, and Legion includes a few subtle callbacks like shots of pigment dissipating in water, or the way the camera frames the space between David and his therapist. The similarities end with Legion and Hannibal’s shared love of stylized therapy scenes, but there aren’t many shows that exist at this rare intersection of surreal visual flair and psychoanalysis.

Despite all the focus on David, we may actually have learned more about Syd this week. When they finally got round to discussing her body-swapping powers, Syd explained: “It’s not my body. That’s how I’ve come to think about it, if anyone can just come and go.” This is the deepest insight we’ve seen into a mutant’s power since Rogue in the first X-Men movie, articulating why Syd is so wary of being touched, and why her powers have more complicated repercussions than the practical issue of being transferred into a stranger’s body.

Another show might have focused on the fact that she accidentally killed someone while inhabiting David’s body, but this angle is more interesting. Syd had these powers long before she met David, and her body issues are a reminder that like David, she’s a mutant and also a person who recently checked into a psychiatric hospital. Melanie Bird’s therapy techniques may not be the most helpful solution for either of them.