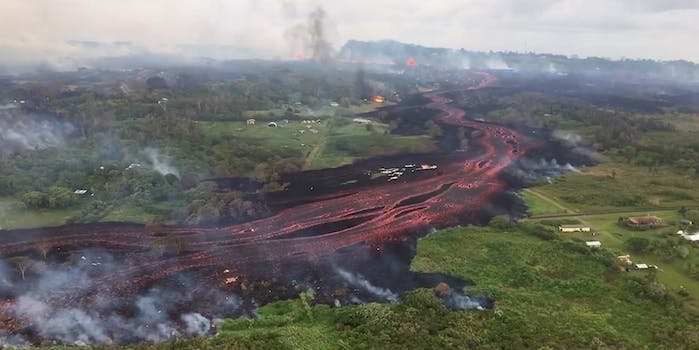 The volcanic activity has been going on for weeks.

On Thursday, a fissure opened up around the Hawaiian volcano of Kilauea, causing lava to pour out in dramatic and dangerous fashion. And thanks to the United States Geological Survey, there’s some striking video footage to show just what the lava flow looked like, shot safely from above in a helicopter. The resulting footage is nothing short of incredible, showing off the intensity, destructive force, and sheer scope of the situation.

The footage was posted to the USGS’s Facebook account on Saturday, and it shows the lava flow from “fissure 20.” It’s only about 30 seconds in length, but even in so short a time, it really hammers home how immense, hazardous, and geologically impressive the situation is.

Helicopter overflight of a fast-moving lava flow emerging from fissure 20 on May 19, 2018, at 7:52 AM HST. The flow is advancing to the southeast. Lava fountaining is visible in the background. The audio is the sound of the helicopter.More photos and video are available on the USGS–Hawaiian Volcano Observatory webpage, at https://volcanoes.usgs.gov/volcanoes/kilauea/multimedia_chronology.html.#usgs #hvo #hawaiianvolcanoobservatory #kilauea #volcano #KilaueaErupts ##LERZeruption #LERZ #KilaueaEruption

The first serious injury of the ongoing volcanic eruptions―which have been continuing unchecked for weeks now, dating back to May 3―reportedly occurred this weekend; one man reportedly suffered serious leg injuries as the result of lava spatter. According to a spokesperson for the county mayor, the man was sitting on his balcony when he was struck by a volcanic rock projectile.

“It hit him on the shin and shattered everything there down on his leg,” the spokesperson said, according to the BBC.

It’s also feared that if volcanic lava flows like the one shown above end up reaching the ocean, it could cause a hazardous environmental condition known as “laze.” When lava contacts with ocean water, according to the USGS, it produces a caustic chemical reaction that can cause respiratory troubles to anyone near it, as well as irritation to the eyes and skin.

There’s no telling how much longer the eruptions and fissures will continue in this fashion, but according to the Guardian, the lava flow on Saturday morning was moving at a pace of up to 300 yards per hour. The lava has already caused the destruction of many homes on the island, and Kilauea is known to be the most active volcano on any of the Hawaiian islands.