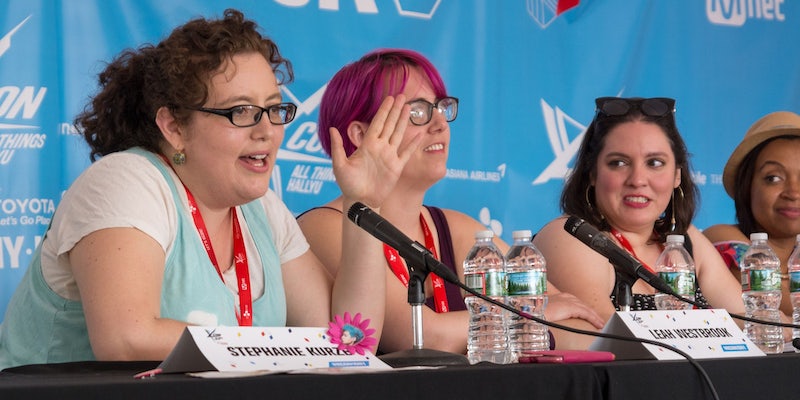 Photo via Geek Behind the Lens

The secret life of K-pop fans over 30

K-pop thrives on youth, and older fans find it's hard to catch the hallyu wave.

As the heat climbed toward 90 degrees, MC Ashley Griffin stood in an outdoor tent Friday afternoon during Korean culture festival KCON in Newark, New Jersey, to speak to a unique audience: K-pop fans over the age of 30.

Every chair in the tent was filled, and people stood at the back to hear more of Griffin’s vibrant sense of humor about hallyu wave culture. Outside, young women milled around in short shorts and crop tops, their hair dyed shades of bright pink and blue. A glance at the attendees of KCON makes it instantly clear that K-pop fandom skews heavily toward younger people. After all, the average age of a K-pop idol is 19.

In Griffin’s audience, several silver-haired women smiled back at her, some shouting an emphatic “Yes!” to her comments. Two mothers sat side by side near the front, unaccompanied by their children. One’s shirt read: “Necessities: Coffee and K-pop.” 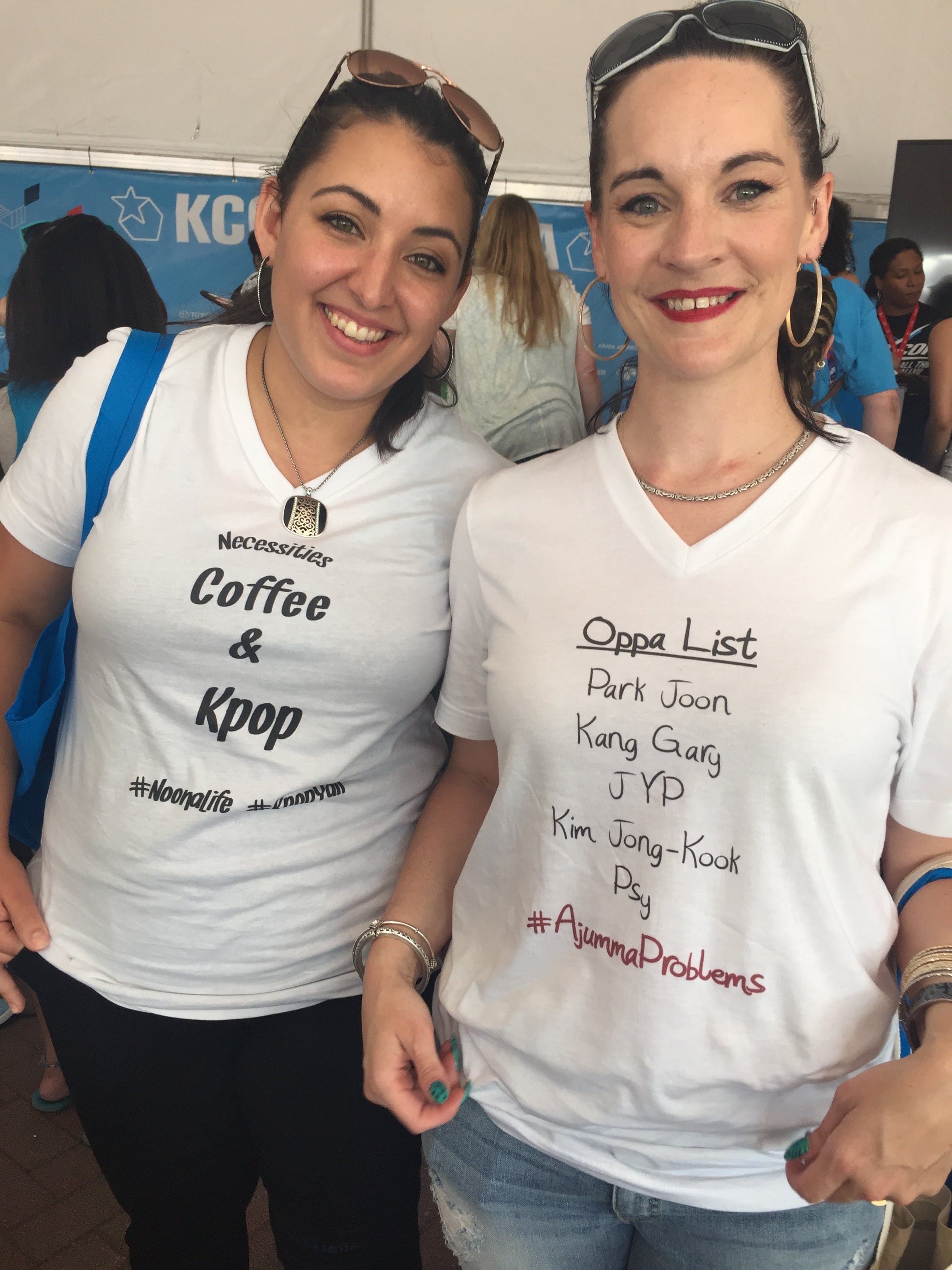 Bethany and Tisha, who go by Mama B and Mama T on their YouTube channel Kpop Mamas, make videos dedicated to all things K-pop. Tisha’s 14-year-old daughter Shelby, who is mostly deaf, also posts ASL sign language interpretations of K-pop songs for other hearing-impaired fans.

“They (deaf fans) never have the experience to see someone signing their favorite song,” Bethany tells the Daily Dot.

Tisha encouraged Shelby to make the videos, which other deaf fans have started to find. She says that Shelby has started to get messages from them thanking her for making the videos.

Bethany and Tisha, who are co-workers in their home state of Arkansas, decided to start their channel in April. Both say their husbands are 100 percent supportive of what they do. They broke 1,000 subscribers on the first day of KCON, an important milestone for them both.

Bethany laughs as she tells us that her 3-year-old can already sing BTS’s “Boy In Luv“—in Korean.

“We’re just trying to be an example for our kids,” Tisha says. “You can be who you are. It will be OK.”

Older fans face a bigger barrier to entry when it comes to the youthful genre. Outlets like Tumblr are driven by teens, and most idols are young enough to be the children of fans over 30. Older female fans are often judged by their peers, who seem to believe they should move on to more age-appropriate media.

“There’s a huge difference about how we view the fandom,” Bethany says. “We talk a lot about the concept of ‘appropriate fandom.’ When you are older and have more things going on in your life you understand the value of being respectful of other people.”

Tisha adds: “I saw BTS walk into the building yesterday and I just stood there and watched them come in. … Its not time, at that point, to take pictures. When they are in that concert hall, that’s what is supposed to happen.”

K-pop fandom is known for its problem with obsessive fans, such as Korea’s stalking culture around idols. Fans have followed artists to their homes, broken into their cars, and called them on their personal phones for a chance at contact. Bethany and Tisha feel that this is damaging to the image of K-pop fans on the whole.

“Korean culture invites you to get to know the stars in a highly intimate way, but it also creates these fans that think they own them,” Bethany says.

When it comes to older fans, many seem to have a sense of division between their fan passions and respecting the boundaries of others. That awareness and thoughtfulness positions them to set an example for younger fans about how to behave in the midst of fangirl paroxysms.

“The older you are, the more you can be enthusiastic about something without invading someone’s personal space,” Ashley Griffin tells the Daily Dot. “You can’t get that back once you cross that line with someone.”

Griffin, who runs YouTube channel multifactedacg, is a Texan native who writes for K-pop outlets and interviews idols, and she was recently inducted into the the World Association for Hallyu Studies. This is her second year hosting panels for KCON.

Griffin believes that the advent of the hallyu wave in America is an excellent opportunity to grow and improve as K-pop enters the international climate. She says that hearing one of the producers of massive Korean talent agency SM Entertainment speak on another panel at KCON made it clear to her that Americans aren’t just fans of the hallyu wave, but integral to where it goes next.

“Ryan Jhun (producer behind Shinee’s hit song ‘Lucifer’) said that SM is listening directly to fan feedback and checks forums and video comments regularly. They want to give us what we are asking for,” Griffin says. “But when you have such a global response, you get a lot of answers. It’s up to us to make sure they are the right answers.”

Griffin says that older fans can bring that to the table.

“Baby boomers herald and champion a new way of thinking, as well as support younger fans,” she says. “It helps it make for a better community.”

Griffin will also host her over-30 panel at Los Angeles KCON, which is held next month at the Los Angeles Convention Center.

“I’m looking forward to expounding the conversation in L.A. ‘Grown folks, make some noise’ is my battle cry,” Griffin says with a warm laugh.

And when it comes to judgment from others on being an older K-pop fan, Griffin echoes the same thing she said during the panel in New Jersey: There is no age limit on what brings you joy.

“You can have a community no matter what age you are,” she says. “This is ours.”

Near the end of the K-pop fans over 30 panel, Griffin responded to an audience question about how older K-pop fans should reply when they are singled out for being the oldest people at a concert. (One panelist told the sad tale of being asked if she was a chaperone at one concert she attended.)

“I once saw a 72-year-old woman onstage during a Shinee fan meet,” says Lisa Espinosa, panel member and blogger. “She got so much mad respect—from her idol group.”

“Be proud,” adds Griffin. “You bought a ticket. When they ask, tell ’em with a smile. And dance your ass off.”