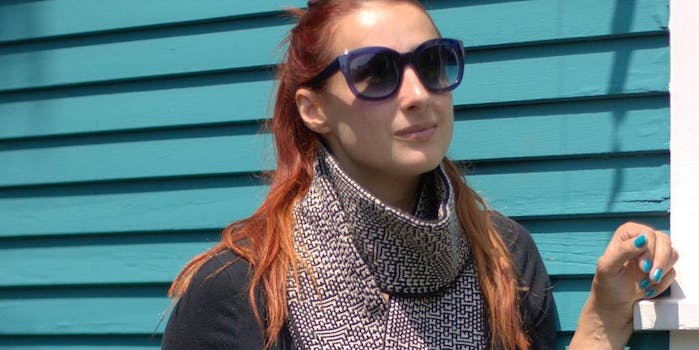 KnitYak designs scarves based on an algorithm, and it needs your fundraising help

No two scarf patterns will be the same.

Science and math offer a wide-range of inspiration for the fashion world. Whether it’s Pi or grid cells, designers can create amazing pieces of clothing with ideas from these fields. More fashionable math accessories could be coming soon if a new Kickstarter campaign for KnitYak reaches its funding goal of $100,000.

KnitYak, founded by Fabienne Serriere, uses elementary cellular automata to create custom math scarves with merino wool. Thanks to the code, no two scarf designs are identical, because they’re based on an ever-changing algorithm. If you order a scarf, you get to approve the design it generates before the product is made, and you even get the chance to see the code itself.

“KnitYak scarves ship with the specific code and generating key used to make the pattern on your scarf. There is something powerful about knowing the mathematics and code behind the pattern you are wearing,” Serriere writes on the campaign page. “If you want to reorder the exact same scarf or a similar coordinating scarf in the future, you provide KnitYak with the source code. Perhaps you want to knit matching items on your modified consumer knitting machine or with hand knitting. With the source code and generating row and width constraints you receive with your KnitYak scarf, you can generate a number of coordinating items.”

It’s a fun idea that brings something unique to your ensemble, whether you love math or just want a cool design.

The money raised will help KnitYak buy an industrial knitting machine. The crowdfunding campaign has 9 days left, and as of this writing it has raised more than $53,000.