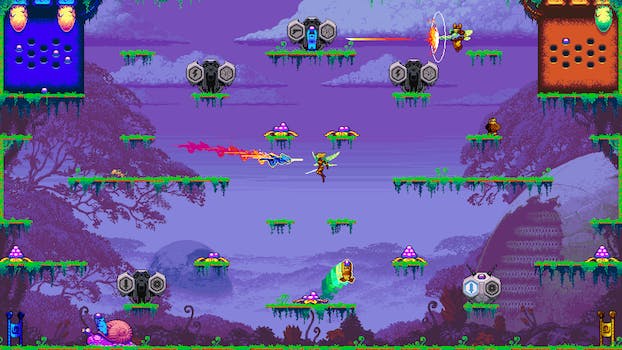 Now's your chance to check out an elusive gaming sensation without leaving the couch.

During last year’s E3 presentation, sandwiched between games like Fortnite and Super Smash Bros. Ultimate, Nintendo announced Killer Queen Black. The trailer clocked in at under a minute of screentime, showcasing a pixelated panic set to hair-raising power metal and intercut with live-action players.

To most viewers, this was nothing more than an intriguing interstitial; another game to think “hey, maybe I’ll check that out” about. To another, smaller segment of the audience, it was likely one of the most exciting 45 seconds in recent memory.

Killer Queen Black is a home version of the indie arcade cabinet Killer Queen. Developed by Bumblebear Games, the game moved through real-life prototypes with foam swords in an open field to a student project at NYU Game Center and ultimately became an arcade sensation. Killer Queen machines (of which there are roughly 100 in the United States) are massive, two-screen behemoths that encourage up to 10 players to crowd around. These cabinets are highly sought after, with players self-organizing in Facebook groups and Discord chats to track down the best time to get together with others and play. 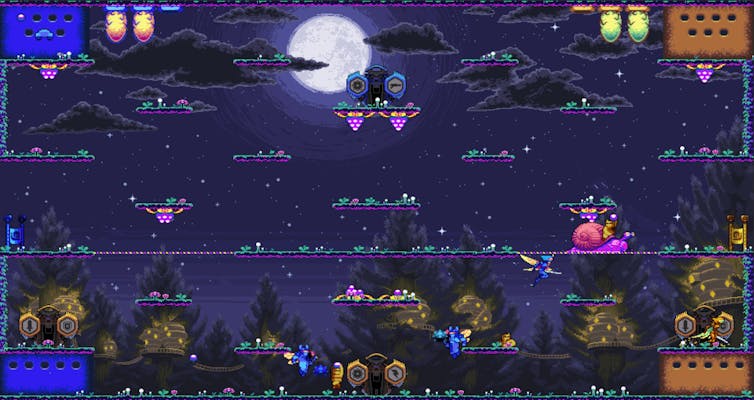 This has given rise to a distinct community, complete with world records and obsessive leaderboards. Gameplay can feel like a mashup of soccer and Street Fighter, with ample opportunities to up the intensity of a single match. Playing the game is always tense and thrilling, but even watching along can be so too. Mechanically speaking, Killer Queen is perfectly preserved in the home edition—but it’s the competitive longevity that makes the arcade version so beloved that poses the biggest question.

In Killer Queen Black, two teams of four players are pitted against each other on an oversized battlefield. At first glance, there might appear to be an overwhelming number of glowing icons and characters, but the game’s vocabulary is remarkably easy to grasp.

Most players control disposable drones known as Workers. There’s no limit to the number of these spawns in one game, and they can serve multiple functions, including leveling up into weapon-wielding Warriors. By using the gates distributed across the map, these characters add an extra threat with the ability to crush other enemies. Each team always has one player in control of the Queen, who can only die three times before a match ends.

There are multiple paths to victory playing out in parallel, either in Killer Queen or in Killer Queen Black. Workers can collect scattered berries, carrying them back to the empty holes on their team’s base to earn an “Economic Victory.” If that seems too complex, simply killing the enemy Queen three times also ends the game. Only a powered-up Warrior or the enemy Queen can earn one of these kills, and the nimble leaders are rather tricky to track down. And finally, if a single player rides the map’s giant snail across the corresponding goalpost, they earn a win.

If you haven’t caught on, playing Killer Queen Black can feel ridiculous. It’s not a game that demands to be taken seriously, though members of the esport community that has developed around it would certainly disagree.

One of the most important things about Killer Queen is, despite an innate complexity, the game is never overwhelming. Combat rarely takes place: with the focus tending to lean toward preventing other players from chasing down the loose purple orbs or hopping onto the snail. This isn’t a fighting game, where technical precision and rote memorization play into skill levels; rather, it’s a game that’s easy for anyone to pick up without feeling like the outcome could be completely random.

Killer Queen frees up space in a genre that’s typically closed-off to newcomers by allowing every players to occupy a different (but important!) role. Sure, two highly adept Queen players may be delicately dueling in the skies above±but the drones hunting berries down below are just as valuable to the team’s overall strategy. A simplicity in the button-mashing frenzy of the arcade game gets slightly elevated in Black, with new weapons in rotation and cleaner visuals to determine where each player is headed next. 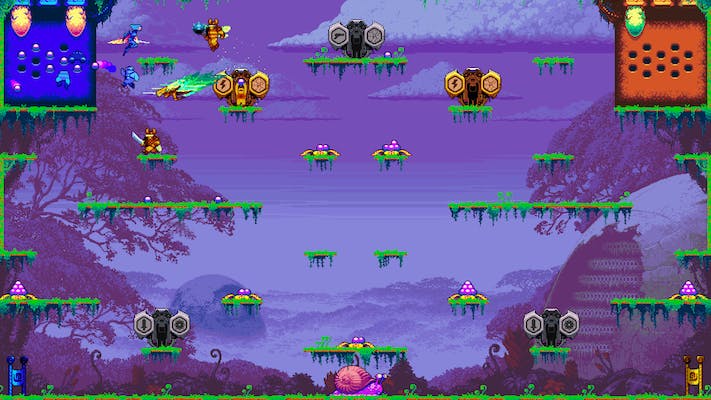 But the fast-paced, high tension of Killer Queen is irresistible, even if you’re playing for the very first time on Nintendo Switch. This release supports local co-op and built-in voice integration, ensuring the best possible experience for any time you want to play.

Killer Queen Black offers a no-nonsense approach to competition. For a $20 asking price, you get access to the full suite of online options and a strong tutorial section. As you learn each role, you will slowly start to see just how intense a single match can be. But amid all that chaos, the rules are always so clearly defined. There’s only one game to be played, and you must learn to play it well.

Having an easily accessible version of Killer Queen is incredibly exciting. Bumblebear Games’ surprise hit harkens back to a different era of gaming, built around real-life interaction and player coordination. But Killer Queen Black was never meant to fully replace the arcade cabinets, but rather recontextualize the excellent experience for a brand new audience. It does so wonderfully.

Killer Queen Black is available for Nintendo Switch and PC on October 11. This review was written based on a Nintendo Switch version of the game provided by the publisher.