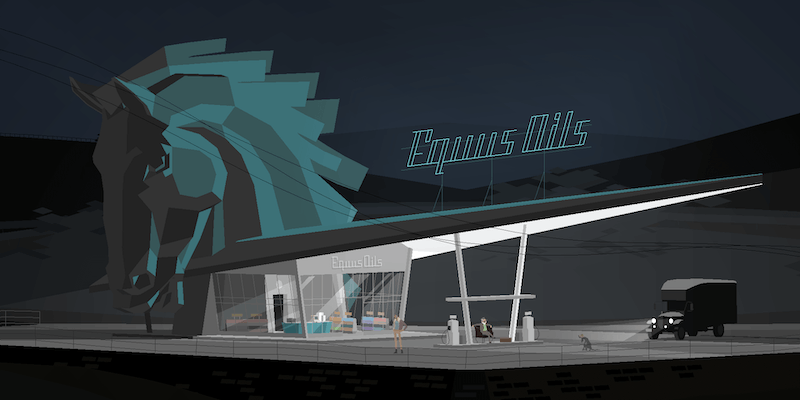 Review: Kentucky Route Zero is one of the most magical games ever made

With its final episode, the haunting and somber indie adventure finally finds its way home.

There comes a moment in the middle of Kentucky Route Zero when the player is told only to follow a sound that is “strange but familiar.” And in a sense, the entire game could be described as such.

As a story, Cardboard Computer’s five-act narrative examines the decline of American prosperity. Set in a vaguely fantastical vision of the southern states, the plot follows a series of workers and drifters who are as down on their luck as one can be. With passages that might have been lifted from Flannery O’Connor, this world imagines a heartbreaking quest that dips into the surreal—though never fully crosses over.

Kentucky Route Zero could be best be described as a ruminative experience onto which the player projects meaning and reads into whatever it is that resonates with them most. But it is far from empty.

The lives of these characters, all united in their solitary journeys, play out over many different scenarios. The plot charts across a great stretch of land, introducing mystical elements and tragic details as it goes. A brilliantly written story pushes the action forward, though there are many moments of quiet reflection.

It is a tale that anyone will find a way to relate to, though the narrative is ultimately is driven by the autonomy presented to players.

You control several characters, but primarily one lonely truck driver with a haunted past. The game opens on Conway, in need of direction, driving along a nondescript southern highway. He doesn’t know it, but his search will soon spiral into a life-changing odyssey. Such is the deliberate pacing of Kentucky Route Zero, affording players enough time to soak in the atmosphere, noodling along like strings plucked on an acoustic guitar.

Gameplay most resembles a standard point-and-click adventure—moving the character around an open space, reading through long lines of dialogue, identifying and interacting with objects in the world. If I hold anything against the game, it is some of the imperfections in how characters handle. Oftentimes, guiding my hero toward the next scene or object of interest felt clumsy. There was no feeling worse than desperately wanting to know what would happen next, only to feel frustrated by the invisible walls guiding my avatar. It never completely derailed my adventure, but it certainly could have been smoother.

What’s unique about this experience, though, is how it anticipates human behavior and allows you to choose not only what happens but also what impression it leaves.

For example, to close one of the many diorama-esque scenes that make up each chapter doesn’t require a simple command or prompt. The player must choose the internal effect each action takes on the character. “Leave this level” is phrased as “Conway doesn’t want to stay any longer.” This mechanic allows for moments of introspection—as if, to progress, you must not learn about the game, but rather reveal something about yourself.

At its best, Kentucky Route Zero plays out like a novel, with remarkable prose and scenes of engaging character work. Just holding conversations with the various companions you meet along the way becomes an impetus to lean in and absorb every detail of the world around you.

It’s difficult to describe the act of playing through Cardboard Computer’s entire surrealist saga in rapid succession. There are so many fantastic ideas pulsing through the veins of every moment, with innovative approaches to back-and-forth conversations, internal arguments, and the consumption of in-world media. Truly, I can draw no direct contemporaries to mind, for Kentucky Route Zero feels like a singular achievement.

If Kentucky Route Zero is a puzzle, it is one with no solution. The mechanics of every scene are malleable and inconsistent in a way that makes it impossible to know what is coming next. Control is taken and given away from the player at unpredictable intervals, sifting between characters and perspectives that only serve to dramatize your role as a mere witness to these accounts.

If Kentucky Route Zero is an adventure, it is one without end. This narrative paints a compelling tableau of people and places that intersect across windows of time that exist far beyond the start and end of the game’s story.

But Kentucky Route Zero as a game—and more precisely, as a product—is defined by that episodic nature.

Always existing on the periphery of the latter half of the 2010s, dropping periodic updates along the way, Kentucky Route Zero is a mosaic of the emerging space for independent games. Initially funded by Kickstarter support, the game now releases on all systems with a major publisher behind it. In 2020, finally finished with this home release, the game resembles an artistic vision frozen in amber, expressive of a movement: changing for better and for worse.

You can feel the influence of the real world on Kentucky Route Zero’s development, just as you can see its success reflected in other titles of the era. Those same years saw the meteoric rise and fall of Telltale: a critical moment for narrative-driven games. Rather than the precise schedule of an entire season, this project’s sprawling ambitions were plotted out over several years. Is one approach more valuable than the other? It’s impossible to say, but each leaves a distinct impression.

As a whole, the legacy of Kentucky Route Zero is already made obvious in recent titles like Control and Disco Elysium, with a pastiche of folksy worldbuilding and staunch, radical politics (for games, at least). This is not to say those developers may have been directly inspired here, but rather to recognize their shared vision.

At the end of a tumultuous decade, it’s only natural to reflect on the years gone by. And here comes a great game to cap the previous decade—and signal the start of something new. If I hadn’t already spent the last several years being told that Kentucky Route Zero was a special game, I’d have known it immediately.

Kentucky Route Zero TV Edition is available on Jan. 28 for Nintendo Switch, PlayStation 4 and Xbox One. This review was written based on a Nintendo Switch version of the game provided by the publisher.