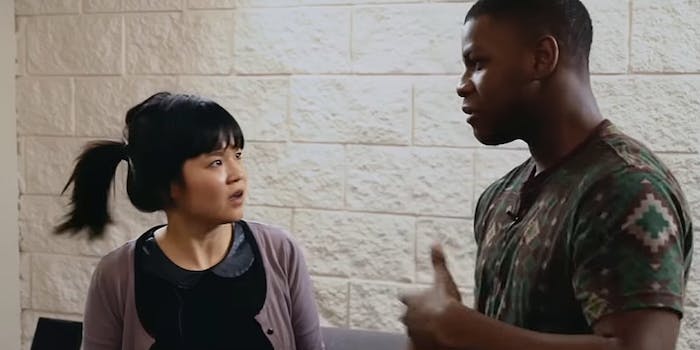 'The character that I had in my head when I was writing, it was like she showed up to read.'

The audition process for most films—but a Star Wars film especially—is often a long and arduous process, one that for most actors ends in disappointment. But a glimpse at the audition tape of one of the new Last Jedi cast members demonstrates that the right actor can leap right off the screen.

A behind-the-scenes clip released Tuesday takes us into one of the final rounds of auditions for Rose, the Resistance mechanic who teams up with Finn for a secret mission and becomes a hero in her own right. The audition involves a chemistry read with John Boyega (Finn), who Rose would be interacting with the most during the film. And though director Rian Johnson had already seen hundreds read for the character, the effect that Kelly Marie Tran had on Johnson when she read with Boyega was almost instantaneous.

“She is like Rose stepped up for me,” Johnson said. “The character that I had in my head when I was writing, it was like she showed up to read.”

Rose has an important part to play in The Last Jedi, one we haven’t often seen in a Star Wars movie. But it doesn’t work anywhere near as well with the hope and optimism that Tran brings out in her.