KCon proved why the Korean wave is only getting bigger.

The young woman serving as emcee for KCon New York spoke flawless English, but far more important was her fluency in another language altogether.

As she greeted a giddy audience of 15,000 fans of the Korean dance music genre known as K-pop, Stephanie Hwang, better known to the world as Tiffany, member of the international K-pop phenomenon Girls’ Generation, instructed the audience to voice their “feels.” 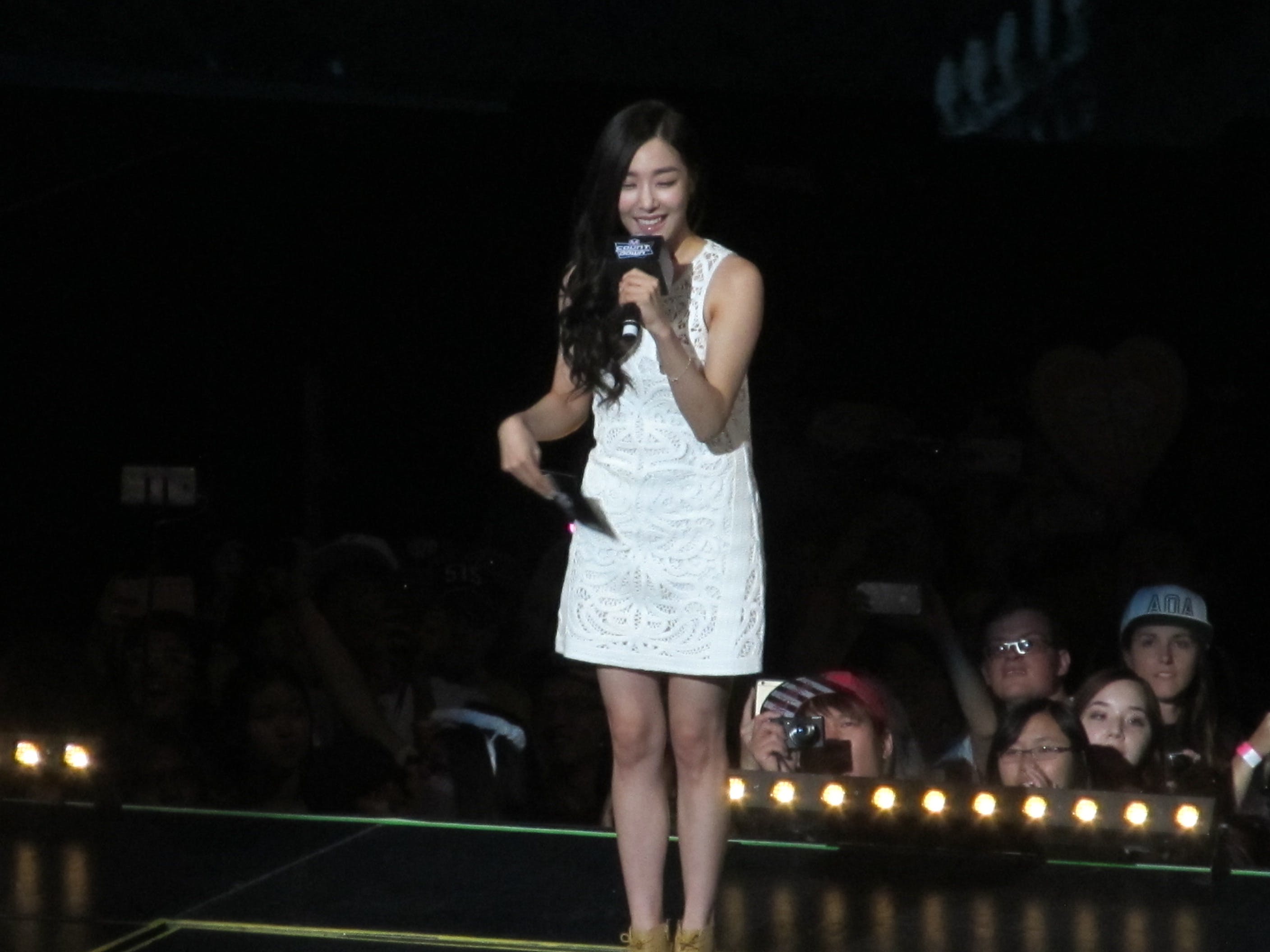 Tiffany was speaking, of course, in the cross-cultural language of Tumblr and international K-pop fandom. And Saturday, at the Prudential Center in Newark, the fandom had a chance to speak back.

KCon began its life in 2012 in Irvine, California. For the past four years it’s grown exponentially, jumping from 10,000 attendees the first year to 60,000 on a hot day in L.A. last weekend. This weekend, for the first time ever, KCon came to the New York metro area—on a much smaller scale. It hosted a modest street convention outside Newark’s Prudential Center and a concert with only four artists (as opposed to the 13 headlining artists in Los Angeles).

But while the events on the ground may have been fairly low-key, the enthusiasm was high. It’s one thing to know that international K-pop fandom exists; it’s another to come face to face with it in all of its diversity and high-decibel amounts of energy. At Saturday’s concert fans were as likely to hail from Queens and the Bronx as from Washington Heights and Columbia Circle. Alongside teenage fans of Girls’ Generation, or “SONES,” middle-aged men ID-ing as “Oppa” held fan signs for members of the all-girl R&B-influenced band AoA (Ace of Angels).

Also omg #sone thank you so much for believing in us at #kcon @soshified, you guys are amazing. You guys are #bae. pic.twitter.com/iNt3XeiwCz

Aleks and Gwen are two teen sisters who made the long trek to KCon with their mom, stopping in Maryland and New Jersey to pick up a third sister in her 20s and their granddad. The family has been traveling around the country together to K-pop events for years. KCon marked their second trip to the Prudential Center; in 2012 they made the drive to catch Big Bang and 2NE1, two of the biggest bands in K-pop, in a rare joint U.S. concert. Big Bang—specifically, their lack of presence at KCon—loomed large over the convention. The band will be returning to play the Prudential Center in October.

Aleks discovered K-pop in middle school when a friend introduced her to the band Shinee. She proceeded to spread her love to the whole family. When I asked granddad f0r his favorite band, he said confidently, “Big Bang.” Alright, then, GD or Top?—referring to two of the band’s members. “Oh, G Dragon,” he replied without hesitation.

Another mom sat in the shade while her teen daughter waited in the long concert line. She’s a single mom, she told me. Taking an interest in her daughter’s love of K-pop is a good way to keep close. The music’s “not really my thing. But she doesn’t like what I listen to, either.”

Still, when she looked around, she was surprised and pleased at the total diversity of the fans she saw. This is why they call the K-pop phenomenon “Hallyu”—the Korean wave. Unstoppable as a tsunami, it’s a pop culture export that’s truly gone global, with a fanbase that’s truly international. 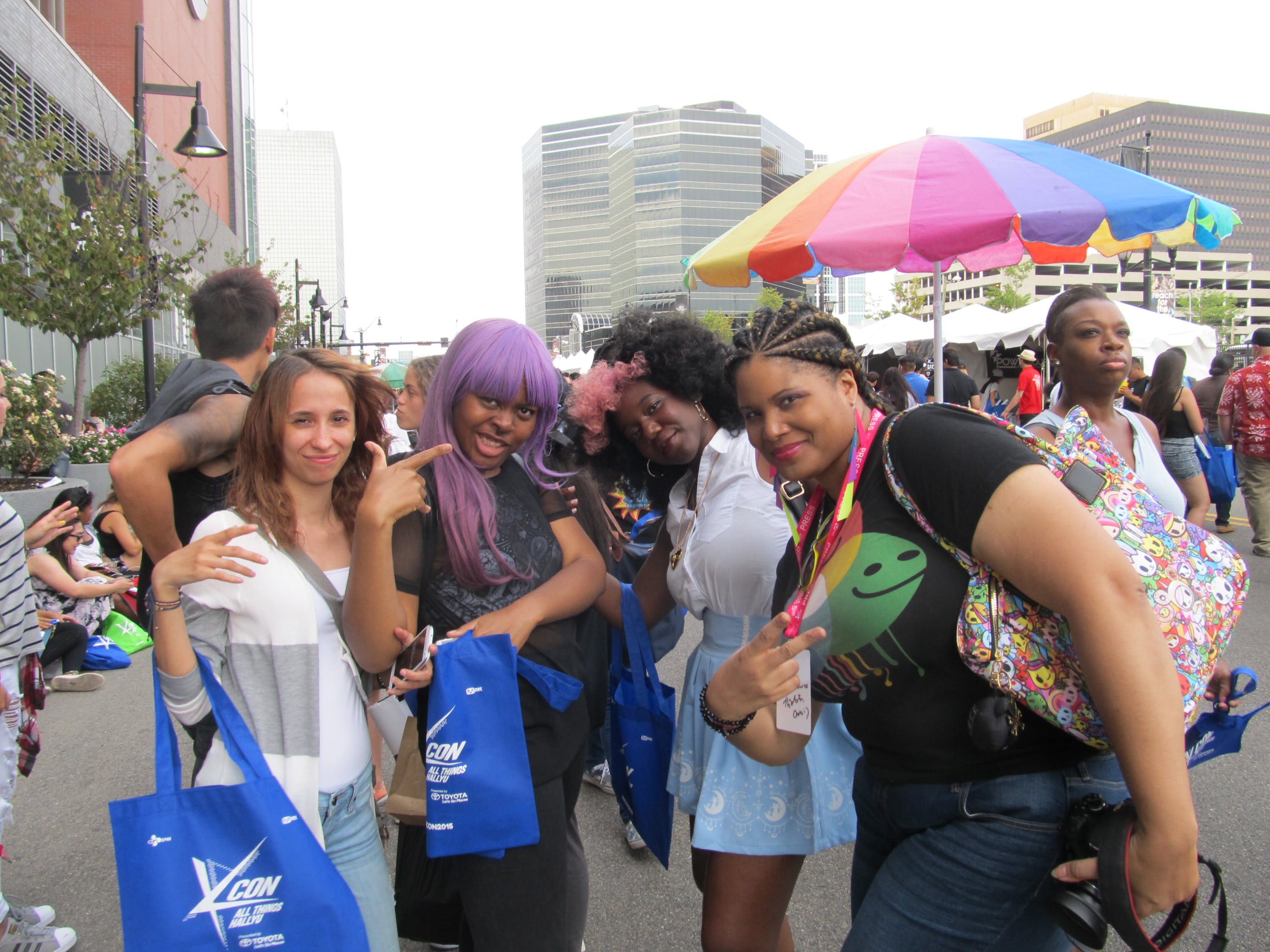 And the fans aren’t the only ones to have noticed. More and more, corporations are getting in on the act. McDonald’s was a huge sponsor of the con, holding a fanart contest and operating a large tent in the pavilion that greeted fans with an odd combination of recent K-pop hits and a pair of giant plastic McNuggets. Verizon was also on site, offering fans the opportunity to fly drones while they wait for the main events. Asiana Airlines raffled away a free trip to Korea. Though the corporate sponsors were few compared to the LA event, it was clear the corporations who had sponsored the event understood the appeal. There’s money to be had in Hallyu, and KCon knows it even if businesses are slow to catch on.

AoA’s Choa, clearly one of the biggest stars of the evening, had plenty to say at the press conference about the international reception the group has had. “When we were thinking of coming to the U.S., we were really nervous and didn’t know what kind of reception we would get,” she said in a Sunday evening press conference. “But from the first moment we arrived at the airport, our fans were there to greet us and encourage us.” Choa also noted how engaged the U.S. audience was, asking lots of questions and holding fan signs at an interactive panel with the group earlier in the day. “That was something else unexpected.” 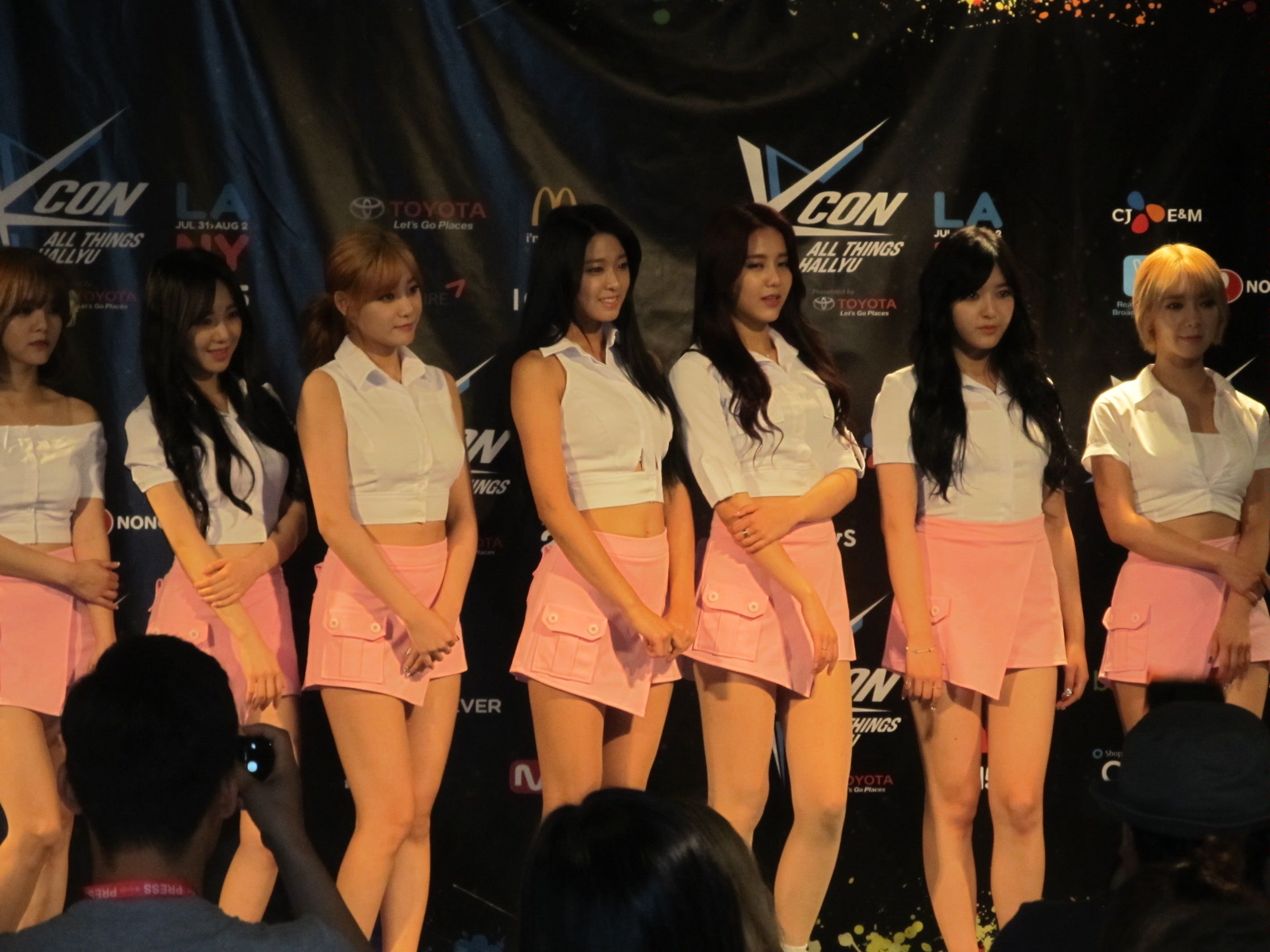 For U.S. fans, the chance to hear from members of the K-pop industry is a rare treat. During the “convention” part of KCon, fans crowded under an outdoor tent to hear conversations about the state of the K-pop business in the U.S., and insider insight on the growing genre of Korean rap. The fans in attendance, many of whom were men of color, didn’t hesitate to challenge the panelists about racism overseas, raising issues of cultural exchange versus cultural appropriation, and how Korean rappers can work to end racist attitudes against the same black communities whose music has inspired their own.

Next door, at the workshop area, fans learned domestic secrets, like cooking tips from Korean idols, and makeup tips to help them look like K-pop stars. It may seem disorienting that such different preoccupations as beauty secrets and cultural conflicts can exist in tandem, but K-pop has always thrived on contrasts: edgy concepts mixed with jarringly peppy dance numbers; ironic self-awareness nestled alongside pop anthems of excruciating sincerity; and studios full of talented, dedicated people who live grueling, exacting lives in order to become carefully presented public images of carefree happiness.

Because that’s the thing about K-pop: It may just be the best entertainment industry in the world. 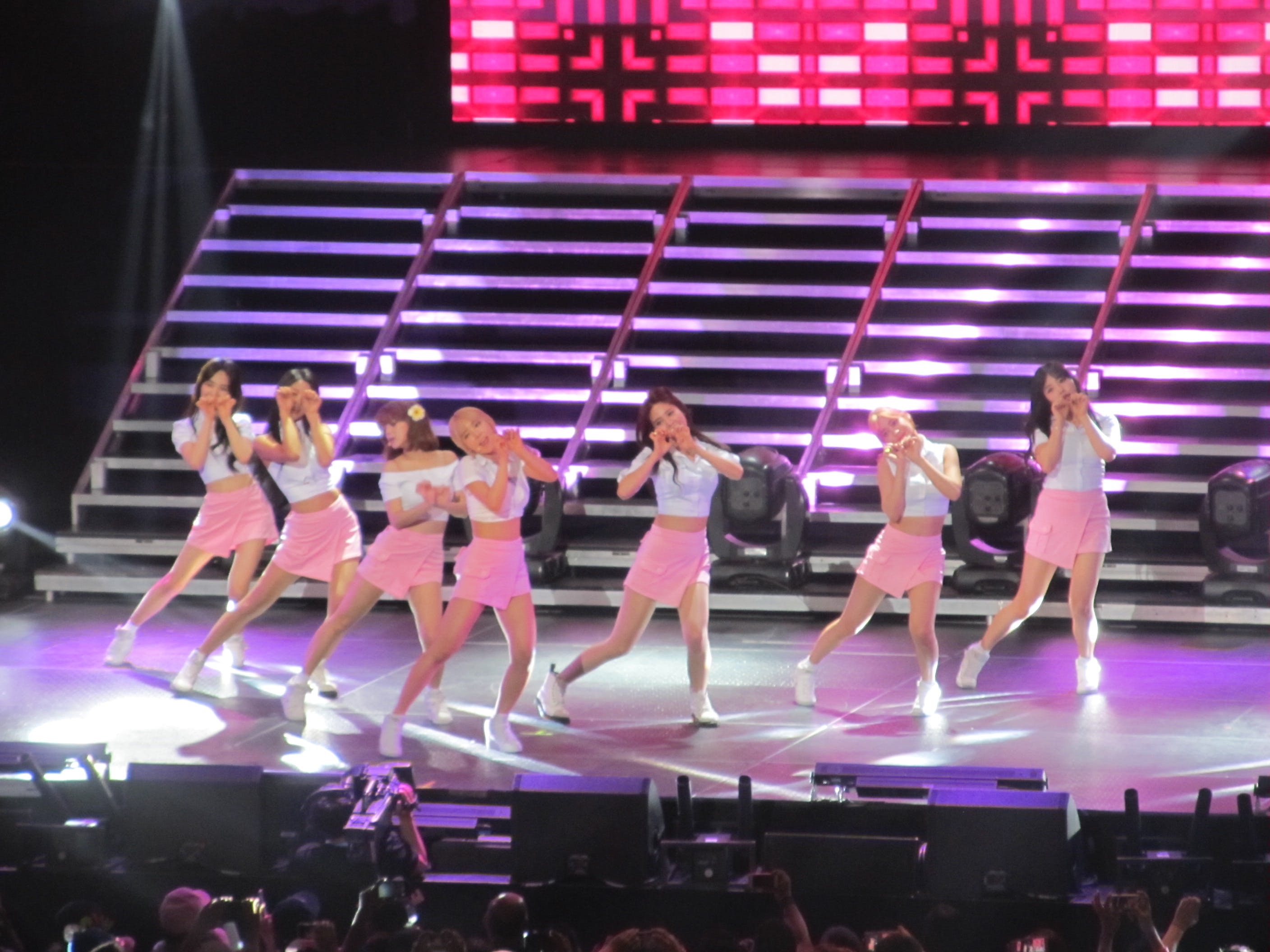 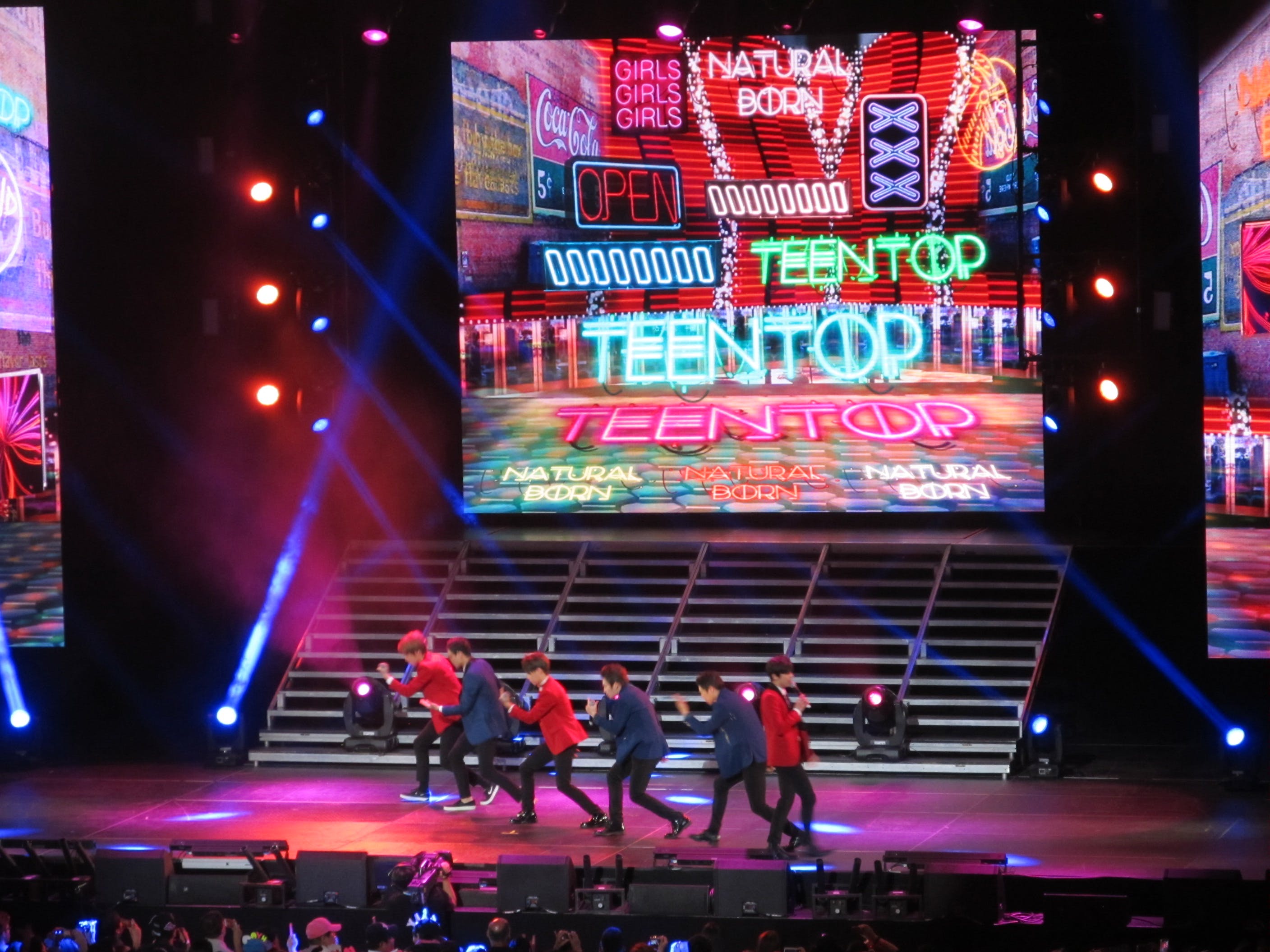 Most K-pop fans have seen their faves endless times—on YouTube that is. But no amount of familiarity with the singing, the bubblegum pop, the high-caliber dance routines and the endless amounts of energy projected from onstage can compare with seeing the real thing live.

That’s Teen Top, one of the four visiting artists of the evening. Like most K-pop groups, they’re carefully groomed in an intensive studio system. Korea’s studio system is a well-oiled machine that pulls vocal talent in from all walks of life. One of Saturday’s performers, adorably earnest boy-band Vixx, became K-pop stars after fans chose them as winners of the reality contest Mydol in 2012.

Dancing is as crucial to the Korean idol system as vocal abilities. K-pop bands routinely create additional dance videos to go with their regular music videos, often with special tutorials for specific moves. Long before “Gangnam Style,” certain Korean dance moves had become so iconic they’d been parodied and reified endlessly by bands and choreographers across the world, and in turn attracted the world’s top choreographers to work with them.

As part of KCon, numerous regional dance groups competed in the New York K-pop Dance Festival, an annual event that sends winners to an international competition in Korea. At the fest, a kind of pre-concert aperitif, thousands of fans swarmed the floor to follow G Dragon’s instructions to put their hands in the air, ?? ?? (everybody at once), and say la la la la la la la. 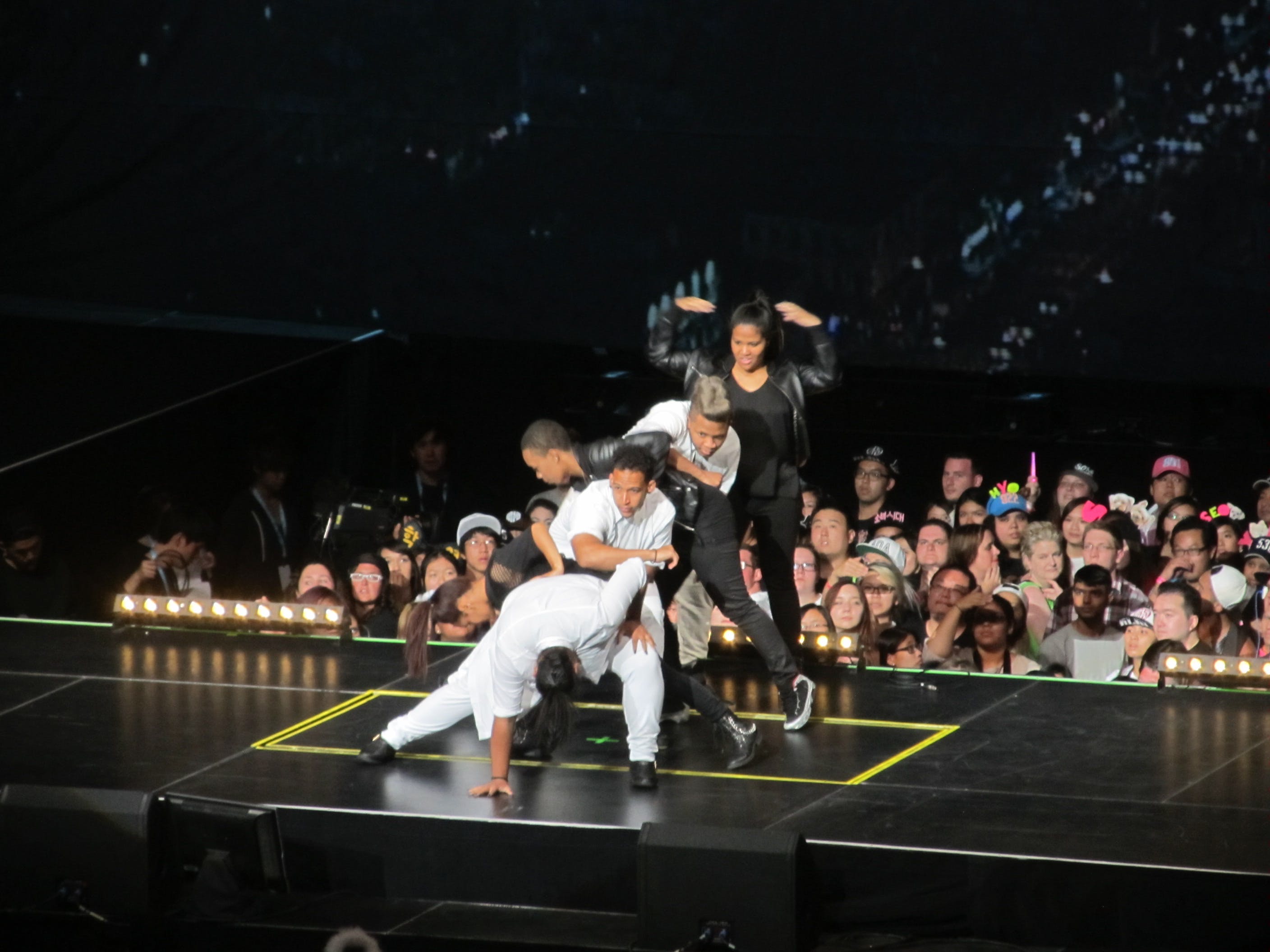 Take Girls’ Generation, one of the biggest bands in Asia and unquestionably the concert headliner. It was their 2009 blockbuster hit “Gee” that arguably fired the first signal flare to the rest of the world that K-pop was a force to be reckoned with. It’s likely you’ve heard this song; it’s also likely you’ve had it stuck in your head for days. At the press conference, Tiffany stated that despite “Gee” being their earliest and most well-known mega-hit, it was the band’s favorite to perform, because every performance inevitably turns into an audience singalong—no matter what country they’re in. Before the concert, I spoke to an employee of a New York Top-40 radio station. She was there to observe and info-gather in hopes of convincing her station to add more K-pop into their rotation. “It just keeps growing,” she said, looking over my head at the sea of fans around her. 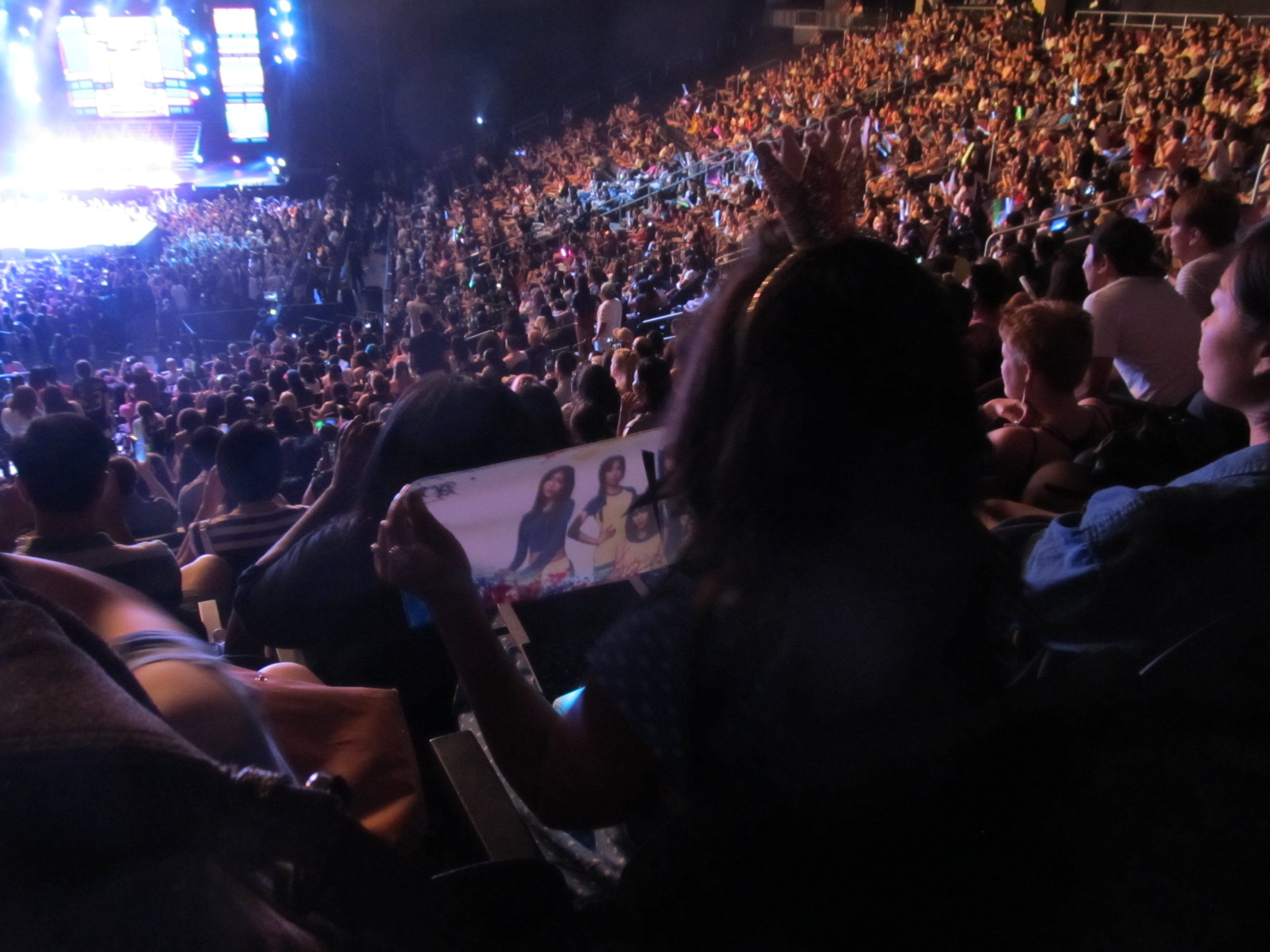