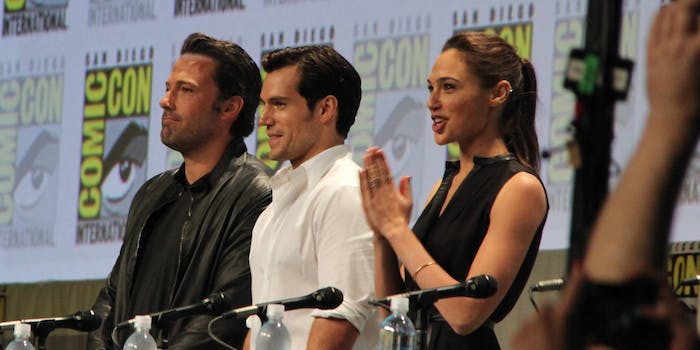 The stars of 'Justice League' want fans to join the protests against the Dakota Access Pipeline.

The Justice League cast are the latest celebrities to show support for protesters at the Dakota Access Pipeline, posting a joint video message on Instagram.

Native American and environmental activists have been protesting the pipeline for months, demanding that the company Dakota Access halt its plans to build a crude oil pipeline through North Dakota, South Dakota, Iowa and Illinois.

The protests gained nationwide attention last week when a private security firm reportedly used attack dogs and pepper spray on protesters from the Standing Rock Sioux tribe. Pipeline construction has already led to the destruction of a sacred Native burial site, and locals are concerned about contamination to the water supply and environment.

In an Instagram video on Jason Momoa‘s page, the Justice League cast (minus Henry Cavill) pledged support for “the youth of Standing Rock as they fight the Dakota Access Pipeline, which will leak into their drinking water.”

Join us in supporting the youth of Standing Rock as they fight the Dakota Access Pipeline, which will leak into their drinking water! You can sign their petition at Change.org/RezpectOurWater, or find the link in my profile. // #rezpectourwater #justiceleague #waterislife aquaman is pissed. ALOHA AC

In the video, Ezra Miller says that “as a gang of Earth defenders,” the Justice League cast urges fans to get involved with the protests and visit their website.

The Dakota Access Pipeline protesters have previously received public support from Bernie Sanders and celebrities including Leonardo DiCaprio, Shailene Woodley and Rosario Dawson. Jason Momoa has previously posted about the issue on Instagram, name-checking Aquaman in a long text post decrying the potential environmental damage caused by the pipeline.