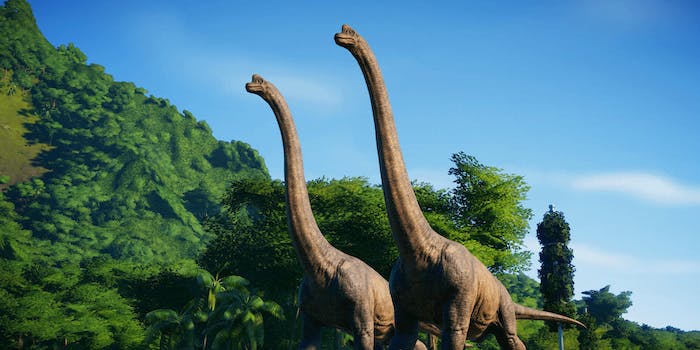 Jurassic World Evolution, like the park, is ruined by human hubris

Jurassic World Evolution certainly embraces the liveliness of its prehistoric creatures, but it never really captures the childlike spirit of Jurassic Park.

It started off so well.

The opening moments of Jurassic World Evolution are crafted to almost perfectly mimic the beginning of your favorite Jurassic Park film. There’s the slow pan over the Universal globe, and studio Frontier Developments even does a callback to the moment a baby raptor breaks through its shell, except this time it’s the studio’s logo. (It’s a little weird seeing a claw break through another globe, but whatever.) Once you’ve gone through the main menu, you’re treated to a charming monologue from Dr. Ian Malcolm himself, actor Jeff Goldblum. The Jurassic Park theme rises over the lush mountain jungles, and just before you can utter “spared no expense,” it settles impotently over several drab buildings with no character, no life, and no clear indicator of their purpose.

It’s an apt metaphor for the whole of Jurassic World Evolution. There’s life in here, but it’s a Pirates of the Caribbean ride to the “real life” grandeur of Jurassic Park’s original vision. No, the game won’t try to eat you alive, but it will eat up more of your time than it should, thanks to a clunky interface, a lack of customizability, and downright stupid behavior from animals and employees alike.

At its core, Jurassic World Evolution follows the same template as countless other park management simulators. Across four islands (plus one sandbox island), you pick and choose where your park’s structures go, make sure its infrastructure is in peak working order, and generally tend to the whims of your customers and employees. The obvious caveat in Evolution is that a third group, your genetically engineered dinosaurs, needs just as much attention if you’d prefer they not get unruly and feast upon said customers.

Jurassic World Evolution’s strongest asset is the process of earning these dinosaurs and later seeing your creations come to life, complete with beautiful animations and graphics. You’ll almost never want to skip watching a new dinosaur get introduced to its pen, following it as it discovers a new area and seeing it lumber about as animals do.

You create dinosaurs by sending out an expedition team to one of dozens of locations around the world in search of fossils. Wait about two minutes, and they’ll return with fossils that you then extract DNA from. Wait another two minutes and you’ll incubate the dinosaur in your hatching facility, digging up more fossils and extracting more DNA in order to perfect your genome and ensure you don’t botch the job and waste a few hundred thousand dollars.

Unfortunately, the act of doing all this research and genetic splicing amounts to the same level of involvement as a mobile clicker game. It’s just plain tedious. No one is saying that science has to be exhilarating, but it should at least feel more fulfilling than snoozing your morning alarm clock.

Like any good CEO, you’ll be balancing the needs of your various employees, and Jurassic World Evolution places this before you in the form of three factions of your company: science, security, and entertainment. Each faction presents you with various goals, such as perfecting a specific dinosaur’s genome, reaching a profit-per-minute record, or even stirring up some conflict in the dinosaur pens that will thrill the visitors, all which boost your profits or provide other benefits.

In a realistic world, these factions might clash with one another from time to time, but they’d at least be unified by the common goal of keeping the business alive and flourishing. Not so in Evolution’s world. Jurassic World’s security director almost has a fetish with breaking down security infrastructure. After focusing too much on the scientists working on perfecting our creatures, the security team opened up various gates and allowed dinosaurs to run free for what I can only assume is some sort of crisis response test.

OK, sure. You’d be fired and imprisoned for something so heinous, but it’s a typical Thursday in your park.

Dinosaurs can be just as illogical, even for wild creatures. Simple variables like how much plant life a pen has or how many dinosaurs of the same species coexist can and will send them hurtling out of confinement to cause some trouble. The issue isn’t that wild creatures are moody; it’s that having one less tree suddenly or five minutes of loneliness turns them from docile attractions to murderous stomping machines.

The lack of logic eventually morphs into frequent busywork. You’ve got a crew of rangers to replenish feeding stalls and protect park visitors from attacks, but you can’t assign individual squads to tackle specific tasks, meaning you have to keep an eagle eye out for problems and spend precious time ensuring they are handled properly.

Jogging around your own park really reinforces how drab and impersonal they are. Unlike the lively entryways of a Disney World park, or even the original Jurassic World’s opening area, there’s very little fanfare or character to any individual park. Instead, thanks to a restrictive layout for park-building, it never quite feels like you have any real ownership over how you direct customers. To Evolution’s credit, it’s nice that the only major resource you have to worry about is electricity (a clear nod to the franchise’s obsession with power outages), but figuring out how to structure everything along paths (another obsession of Evolution) is tedious and frustrating—and will have you demolishing more than a few substations and power lines.

Jurassic World Evolution certainly embraces the liveliness of these prehistoric creatures, but it never really captures the childlike spirit of Jurassic Park and Jurassic World. The delight of witnessing a beautiful, miraculous creature (be it from the eyes of impressionable children or the skeptically stunned Drs. Grant and Sadler) is mysteriously absent. Visitors can’t be clicked on to read their mood or to find out what attractions they’re most interested in, leaving you to figure out your next step solely from a spreadsheet of needs and resources.

Is your entertainment director begging for a visceral duel between two dinosaurs to thrill customers? While you’ll inevitably lose one animal, the good news is you don’t have to have any of the park’s guests present for the fight to have an effect on their enjoyment levels. At least when the occasional dinosaur died in one of the films, it usually had a captive audience.

Jurassic World Evolution certainly keeps in line with the series’ underlying themes: What is at first a miraculous surface-level idea is soon turned to ruin by the fallible nature and hubris of humans. We’re witnessing John Hammond’s legacy, not as scientific and entertainment genius, but as a flea circus ringleader.