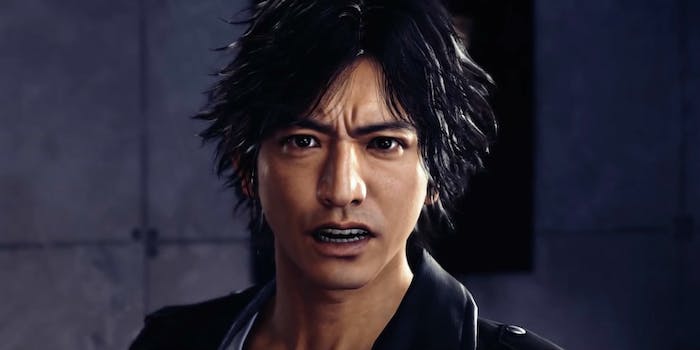 Leave it to the team behind the infamous Yakuza series to make yet another goofy, potentially riveting tale of crime and street justice. Sega announced Judge Eyes for the PS4 at this year’s Tokyo Game Show on Monday, and it looks like another fun romp through the criminal underbelly of the fictional Kamurocho. Let’s put it this way: You get to smash someone in the face with the wheels of a skateboard while doing an ollie.

Judge Eyes’ announcement trailer shown off at TGS introduces us to Takayumi Yagami, a defense lawyer who just managed to acquit a young man of criminal charges, only for the same man to be implicated in a gruesome murder shortly after. The shame of it all is evidently too much for Yagami, who quits his career to become a private eye, dons a leather jacket, and a much cooler hairdo.

Similar to the gameplay of the Yakuza series (we just reviewed the mostly excellent Yakuza Kiwami 2), you’ll roam the densely detailed streets of Osaka’s Kamurocho district completing quests and beating up bad guys. There’s also the customary hours and hours of drama-filled cutscenes, full of that smoky Japanese dialogue Yakuza fans will recognize. Combat is the same kind punching and kicking the Yakuza series has always been known for, but it looks like you can switch between fighting styles ala Yakuza 0, as opposed to Yakuza Kiwami 2.

Most interestingly, it looks like Sega is adding another slew of mechanics when you’re not exchanging blows. Since Yagami is a lawyer-turned-detective, he’s got some tools to help him solve cases, like a camera that can catch adulterous lovers entering a hotel, a drone that captures an act of lechery in progress, and plenty of disguises to help him infiltrate the seedier sides of town. Just don’t question the rave glasses and Super Saiyan energy beams emitting from his hands in the cage fight at the very end of that trailer above. We certainly aren’t.

Yagami is played by the real-life actor Takuya Kimura, known for his roles in action dramas like Love and Honour and a live-action adaptation of Space Battleship Yamato. It seems like Sega is sticking with a gruff, but lovable protagonist in the vein of Yakuza’s Kazuma Kiryu, and you know what, I’ve got no problems with that. Even though they’re returning once again to the streets of Kamurocho, if they can make the town feel alive, who am I to say no to Judge Eyes?

Make sure to check out our full review of Yakuza Kiwami 2 if you need a refresher on the Yakuza team’s latest work.