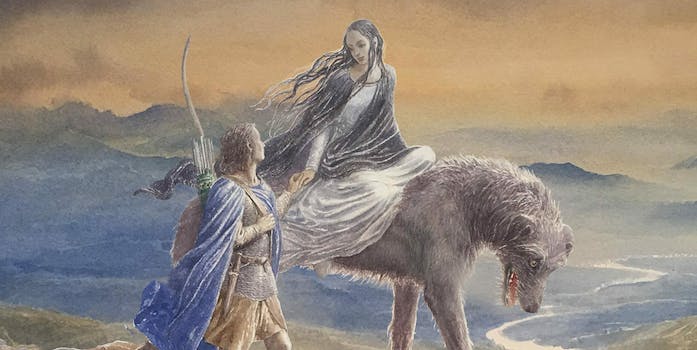 J.R.R. Tolkien’s love story ‘Beren and Lúthien’ is out today

Released in full 100 years after it was written.

J.R.R. Tolkien’s greatest love story has finally been published as its own worthy tale nearly 100 years after he first wrote it.

First announced last October, Beren and Lúthien tells the tale of Beren, a mortal man, and the immortal Elf Lúthien. Lúthien’s father doesn’t like Beren, so he gives Beren the impossible task of stealing a Silmaril, a much-coveted gem crafted by the Elf Fëanor. Beren and Lúthien eventually attempt to take one from Morgoth, Middle-earth’s first Dark Lord. Both are killed by a wolf who swallowed the Silmaril, but they are later restored to life, and Lúthien was given the gift of mortality.

The tale may sound familiar to some Lord of the Rings fans even if they’ve never read it. The romance of Aragorn and Arwen—who are both descendants of Beren and Lúthien—mirrors it, and Aragorn mentions it in The Fellowship of the Ring. Fans may have also already read some of it in The Silmarillion, a comprehensive tome of Middle-earth’s First Age, where much of the narrative resides.

For the first time, Tolkien’s son Christopher, who has pieced together much of his father’s works and is now 92, has edited Beren and Lúthien’s epic love story into one volume. Beren and Lúthien was released on today, 10 years after the publication of the last Middle-earth book, The Children of Húrin. Alan Lee, an English illustrator who previously worked on The Hobbit and The Lord of the Rings trilogy and won an Oscar for Best Art Direction on Return of the King, illustrated Beren and Lúthien

According to a statement from Houghton Mifflin Harcourt, Beren and Lúthien’s U.S. publisher, the story edited by Tolkien’s son Christopher, will include the lovers’ story in its original form along with other passages that help

“In this book Christopher Tolkien has attempted to extract the story of Beren and Lúthien from the comprehensive work in which it was embedded; but that story was itself changing as it developed new associations within the larger history. To show something of the process whereby this legend of Middle-earth evolved over the years, he has told the story in his father’s own words by giving, first, its original form, and then passages in prose and verse from later texts that illustrate the narrative as it changed. Presented together for the first time, they reveal aspects of the story, both in event and in narrative immediacy, that were afterwards lost.”

Tolkien first started writing the story of Beren and Lúthien in 1917, shortly after he returned from France and the Battle of the Somme in World War I. It first appeared in The Book of Lost Tales and has been published in other forms and has changed greatly since then. But it’s also one with a personal touch: Beren and Lúthien was influenced in part by Tolkien and his wife Edith’s real-life love story, and the names of Lúthien and Beren were added on the Tolkiens’ headstone in Oxford.

JRR Tolkien wrote an epic love story about Beren and Luthien. Those names were carved onto his and his wife's grave. pic.twitter.com/yflLyMk5jP

Beren and Lúthien is now on sale in the U.S. and U.K.