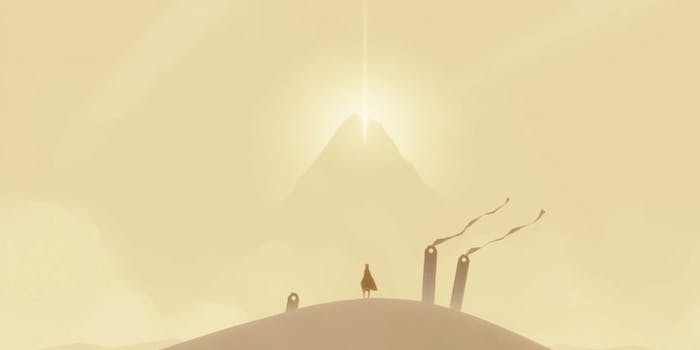 Journey will continue—on the Playstation 4.

It was easy for this news to get lost in the sea of game announcements and trailers coming out of Gamescom this week. Journey, however, is a game whose long-term importance to the video game world will probably outshine that of most of the games being shown in Cologne, Germany right now.

The online gaming community is usually portrayed as a cultural cesspool. From 10-year-olds shockingly and casually tossing around curses in Call of Duty to League of Legends players needing to have their toxic behavior psychologically-adjusted by Riot Games, the online gaming world does have a plethora of dark spaces.

Journey, on the other hand, is a game where no one has the ability to curse one another out over a headset. There is no talking. There are only songs sung by avatars controlled by total strangers. And there is no competitive spirit to set players against one another. In Journey, a novice and an experienced player who has already beaten the game are paired up and have to trust one another to navigate through the ruins of a destroyed civilization.

Players in Journey have to be physically close to one another in order to fly, and flying is the key to uncovering secrets. Players have to walk practically arm-in-arm to sing to and thus warm one another in frigid snow levels, or else freeze to death.

Journey is such an intense, emotional experience that it really does have to be played to be entirely understood. Prior to today’s announcement, it was also an experience that was limited to the PlayStation 3, which is now an “old” console, and as such would fade from gamer culture in a matter of years.

Now that Journey has been announced as a cross-buy title, however, it will live on as an active part of the video game world for however long the PlayStation 4 is a “current” gaming console. Based on how long the previous, seventh generation consoles lasted before new hardware was released, that could mean Journey might be relevant for another decade.

When players finish Journey, and go back to help out a new player the way they were once helped, they feed a heartwarming game loop that the video game world is lucky to have persist through another console generation.