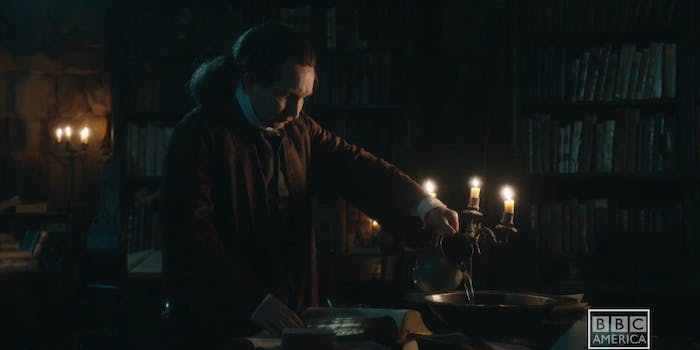 This is one of the most exciting fantasy dramas of the year. Now, if only they'd tell us when it comes out...

At long last, the BBC has released some teasers for the upcoming adaptation of Jonathan Strange and Mr Norrell, Susanna Clarke’s historical fantasy novel about two rival magicians in Regency-era England.

Fans have waited a while for this adaptation to surface, after the novel spent almost a decade in Hollywood development hell before arriving at the BBC. Written by Peter Harness (Wallander, Doctor Who) and directed by Toby Haynes (Doctor Who, Sherlock), the seven-part miniseries may actually be a better fit than a big-budget Hollywood movie, especially given the length and complexity of the novel.

The first teaser won’t mean much to those who haven’t read the book, but Jonathan Strange fans will guess the voiceover comes from the mysterious Gentleman with the Thistledown Hair. The second trailer gives us a little more, including a shot of curmudgeonly magician Mr Norrell (Eddie Marsan) looking into a scrying bowl, and a glimpse of a party scene in a magical realm—perhaps the Gentleman with the Thistledown Hair’s kingdom of Lost Hope?

A short clip leaked online last year, but these are the first official trailers from the BBC. Jonathan Strange and Mr Norrell has received surprisingly little publicity for such a prestigious adaptation, although fans are nearing the end of their long wait for more information. The first episode is due to air sometime in May, so you can expect more trailers to pop up over the next few weeks.