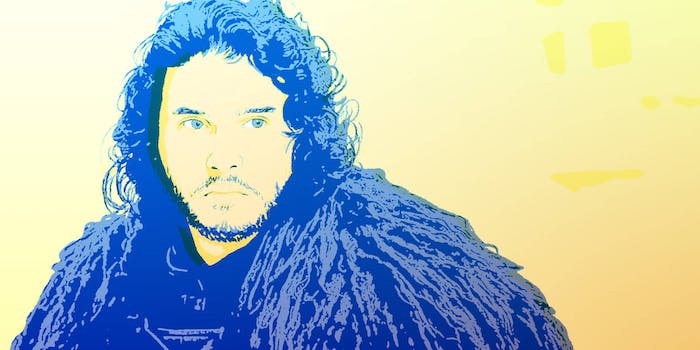 A brief history of just how dead Jon Snow is

Will people believe 'Game of Thrones' this time?

HBO released the title for the first episode of Game of Thrones’s sixth season, and it confirms the one thing we already know.

A press release sent to reporters earlier today confirmed the actors and actresses who will be part of season 6, along with a short synopsis of the season premier episode, titled “The Red Woman.” The description doesn’t include every character in the episode, but it does mention Jon Snow, Daenerys Targaryen, and Cersei Lannister.

While Game of Thrones’s synopses are notoriously vague—just look at how it’s choosing to describe the return of Myrcella Baratheon’s dead body to King’s Landing—this one went for a rather clear-cut statement.

“Jon Snow is dead,” the press release states in the synopsis’s first sentence. It’s not surprising that HBO, having already hunkered down on the “Jon Snow is dead” line for nearly 10 months, is sticking with it. It may end up being more of a technicality than anything, especially in light of ample evidence to the contrary. But right now he’s very much dead.

Some are now taking the synopsis as a confirmation of Jon’s fate, but anyone who’s paid attention to the past 10 months of Game of Thrones interviews can tell you it’s far from the only time someone has spoken about it. Whether you believe it or not is another question, which is likely why they’ve had to reiterate that Jon Snow is no longer among the living so often.

“I’ve been told I’m dead,” Harington said. “I’m dead. I’m not coming back next season. So that’s all I can tell you, really.”

We now know that Harington is, in fact, coming back to play Jon’s corpse and said that filming took place over a couple months.

“We would hope that after seeing the scene and the way it’s shot that the answer to that will be unambiguous in the minds of the people watching it,” Weiss said. “It should be pretty clear what happens by the time you’re done seeing that scene. It’s not an, ‘Oh what just happened scene?’”

Unfortunately for everyone involved, even something as unambiguous as being stabbed six times hasn’t convinced everyone, so the theories have swirled around for months.

Since then, we’ve heard of Jon’s death on multiple other occasions. Director David Nutter even confirmed it to President Barack Obama, which he revealed at San Diego Comic-Con. HBO programming president Michael Lombardo said it again during the Television Critics Association press tour. Harington, whose hair has been under mass scrutiny by fans for some time, was asked about it by the Duchess of Cornwall during Wimbledon.

It’s a question that the rest of the Game of Thrones cast has been asked during red carpet appearances, interviews for other projects, and almost nonstop as they begin the press tour for season 6.

While an early Emilia Clarke interview offered some ambiguity, the general consensus among the cast is either Jon is dead or they don’t know because they didn’t get that part of the script. Take Peter Dinklage, who had to handle the question during his stint at Saturday Night Live last week. He addressed it in his monologue, saying that “if I’m not in the scene, Petey no read-y.”

Even Harington, who claims he’s no longer part of the show, still has had to go through the ringer. He even had to take a lie detector test to prove he’s telling the truth about Jon being dead.

Won’t somebody believe Kit? At this rate, it’s highly doubtful. Maybe putting it in the synopsis just might work.