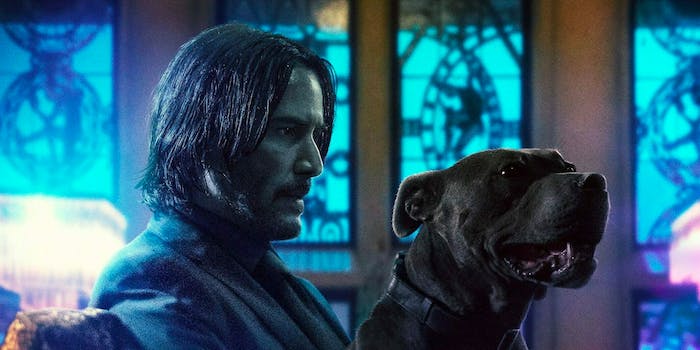 The references to Greek and Roman myths are only the beginning.

The John Wick franchise is surprisingly spiritual compared to most Western action cinema. With its blend of imagery from Greek mythology and the Russian Orthodox church, it differs from the nonspecific Christian underpinnings of, say, Die Hard taking place at Christmas.

A deceptively simple premise provides the framework for a rich fantasy world of elaborate rituals and visual symbolism. Ostensibly a crime syndicate, the High Table borrows the language and culture of organized religion. The Continental hotels are sanctuaries for the faithful.

Chapter 3—Parabellum begins, quite literally, with John Wick being excommunicated. To survive as an outcast, he returns to the spiritual traditions of his childhood, retrieving a rosary from a hollowed-out book of Russian folktales. Instead of representing Christian faith, that rosary is a “ticket” symbolizing his former allegiance to a Belarussian gang. Like the High Table’s obsession with ritual fealty, this echoes the real-world Italian mafia’s links to the Catholic Church. John exchanges his ticket for safe passage to Morocco, where he embarks on a spiritual quest into the Sahara.

Following a set of prophetic instructions, he wanders through the desert until he finds The Elder (Saïd Taghmaoui), a nod to the Islamic origins of the original hashshashins (assassins) that inspired the High Table’s power structure. Here, John articulates his deeper motives for the first time. This wasn’t necessary in the first movie, a straightforward revenge thriller, but by Chapter 3, it’s a little harder to understand what fuels his relentless drive. We need to learn more about John Wick’s soul.

John’s wife and dog are dead, and he doesn’t seem to enjoy this life of lonely violence. So why does he keep going? Speaking to the Elder, he explains that he wants to honor of his wife’s memory—a different philosophy from the typical Dead Wife role. Instead of seeking to avenge Helen’s death (in fact, she died of natural causes), John’s initial killing spree began because someone interrupted his path toward peace and healing.

Now, John wants to live because Helen would want him to live—and because once he’s gone, there will be no one left to remember her. That’s John Wick’s personal faith, and in order to keep it alive, he must pledge himself back to the High Table. Cutting off his ring finger, he embraces a life of monk-like service. It’s a perverse act, but it somehow feels more sincere than the way other characters align their spirituality with a life of crime—Viggo Tarasov stashing stolen goods in a church, for example.

John Wick’s spiritual underpinnings are more obvious in Chapter 3, but they’re visible from the start of the franchise. When he sets off for revenge in the first movie, we get our first big pieces of religious symbolism.

Digging up his basement floor, John retrieves gold coins to pay the Continental concierge Charon, who is named after the ferryman who transports dead souls to Hades. Then when John changes from domestic clothes into his assassin suit, he reveals extensive tattoos including a giant crucifix (likely from his Russian mob days) and the Latin inscription “Fortis Fortuna Adiuvat”; Fortuna, the Roman goddess of luck, favors the bold or strong. Versions of this quote are popular in the U.S. military, but given Wick’s criminal backstory, it’s more likely to be a description of his personal creed.

Each John Wick film follows a clear religious or mythological theme. The first is John’s journey to the underworld, descending from civilian life into the violent parallel universe of the High Table. (His wife’s name may also be inspired by Helen of Troy, the woman who sparked the Trojan War in Greek mythology.) In Chapter 2, he accepts an impossible quest for a feudal overlord, complete with a fight scene featuring statues of Hercules and the Greco-Roman pantheon. Chapter 3 introduces the clash between personal faith and organized religion, culminating in John Wick rebelling against the gods.

The world of the High Table is obsessed with rules, rituals, and blood oaths. For a relatively dialogue-free franchise, characters spend a ton of screentime discussing their legal system. No one cares about breaking normal human laws (in fact, the police actively ignore High Table business), but the rules of the Continental are sacrosanct. It’s genuinely shocking when someone breaks one.

This idea marks Chapter 3 as a turning point, because after fighting to return to the fold, John is condemned to death—surely laying the groundwork for the High Table’s downfall once John seeks revenge. The title, Parabellum, is the second half of the Latin saying “If you want peace, prepare for war.” All John ever wanted was peace, and in order to get it, Chapter 4 will see him and the Bowery King reject the High Table’s authority and declare war. They’ve realized that they can’t survive within the system, and so the system itself must be destroyed.