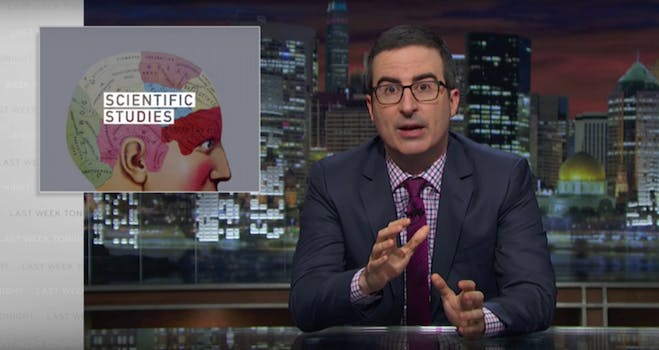 ‘There’s no Nobel Prize for fact-checking.’

Science on the Internet can be an incredibly mesmerizing and contradictory thing, but John Oliver is now helping you sift through the noise.

As the Last Week Tonight host explained on Sunday night’s show, studies may be full of bias; are not all equally valuable; and are often misrepresented by the people who conduct them in order to get news coverage. And because some journalists don’t read the actual studies, relying on a press release to write their stories, the studies you hear about might be different from what you hear.

And then there’s P-hacking, a phenomenon where the data can be manipulated (by expanding or narrowing it) until it supports a particular hypothesis.

“Is science bullshit?” Oliver says. “No, but there is a lot of bullshit currently masquerading as science.”

Oliver thinks that science deserves better than to be talk-show gossip, because while imperfect, it’s important. The notion that science is casual reading is what lets people get away with denying climate change or believing that vaccines cause autism. (It’s real, and they don’t.)

For the people who still want that kind of pseudoscience in their lives, Oliver has the perfect place for it: special, pathetic TED-like Talks.