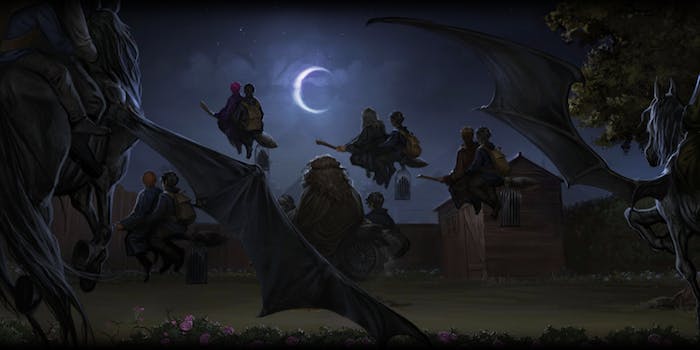 J.K. Rowling reveals why the Dursleys don’t like Harry Potter

Plus new insights into Hagrid and Dumbledore.

On what would be Dudley Dursley’s 35th birthday, J.K. Rowling and Pottermore gave Harry Potter fans some delectable backstory one one of the more unpleasant families of the series.

Pottermore released the Deathly Hallows chapters Tuesday featuring the same kind of item hunting and occasional book tidbit we’ve come to expect with these releases. In the very first chapter we get the most amount of insight to date on the Dursleys, who are still perfectly normal.

The Dursleys met at work, went on a series of dates, and eventually got engaged in a dull, normal progression during Lily’s final year at Hogwarts, and while Vernon was shocked to learn about Lily being a witch, he didn’t blame Petunia for her “freak of a sister.” The meeting between the Dursleys, Lily, and James was a downright disaster, mainly because James was amused by Vernon. The relationship crumbled even more from there.

How the Dursleys treat Harry trickles down to how each of them viewed Harry’s parents. Vernon never liked him because, like Snape, he looked too much like James—whom he hated. Petunia felt like she had to take Harry in after finding out how “bravely” Lily died and spent the rest of her life punishing him for it. Mixed in were years of jealousy and bitterness about Lily being magical and Petunia not being able to do magic.

Rowling revealed that she had names in mind for the Dursleys from the start.

“‘Vernon’ is simply a name I never cared much for,” Rowling explained. “‘Petunia’ is the name that I always gave unpleasant female characters in games of make believe I played with my sister, Di, when we were very young.”

Among the other new reveals is why Rowling gave Dumbledore and Hagrid the names that she did. It’s all about the magical science of alchemy and the significance of the colors red and white in regards to representing “two different sides of human nature, which must be reconciled.”

“This was the inspiration for the Christian names of Rubeus (red) Hagrid and Albus (white) Dumbledore,” Rowling wrote. “These two men, both hugely important to Harry, seem to be to represent two sides of the ideal father figure he seeks; the former is warm, practical and wild, the latter impressive, intellectual, and somewhat detached.”

Rowling noted that Hermione, always curious about learning as much as she can, uncharacteristically never took advantage to read up about alchemy while she was at Hogwarts. But considering her experience with it—and more than enough adventures in life and death to last her a lifetime—we can’t really blame her.