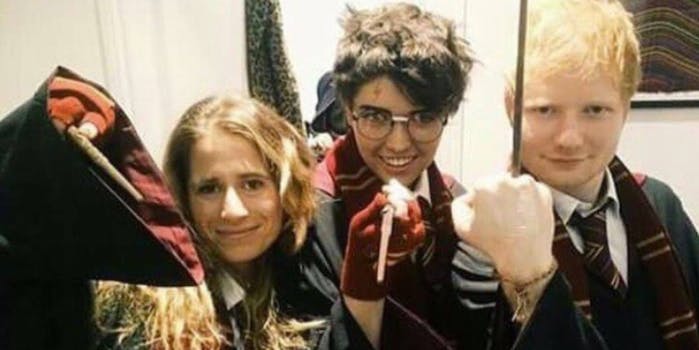 Anyone with a stick can pass for Harry Potter on Halloween, but getting author J.K. Rowling’s retweet of approval takes something truly magical.

Stuck in an airport with some time to kill Monday morning, Rowling let her 8.5 million Twitterfollowers know she was scrolling through their Halloween photos.

Stuck at foggy airport, so I'm looking at your Hallowe'en photos…

She then proceeded to tweet her favorite outfits, which even included a costume from Ed Sheeran or someone who should have been Ed Sheeran for Halloween.

Hiii @jk_rowling – we are a little squad of slytherin' students 🕸🐍💚 pic.twitter.com/1jtiGoGLmg

Have been reading The Philosopher's Stone to the boy. This is how he has chosen to go to preschool today! @jk_rowling pic.twitter.com/OfhykOB6LP

We got to see Cursed Child dressed like this yesterday :D @jk_rowling @HPPlayLDN #HappyHalloween pic.twitter.com/FxwXfYWcC0

At the wizard themed fireworks at the weekend my son was channelling his best #HarryPotter pic.twitter.com/6QbuxXqhda

this was my costume and a little bit of light effects @jk_rowling pic.twitter.com/SVUZ3ZxkZb

To see even more costumes and decorations, check out the full rundown on Mashable.