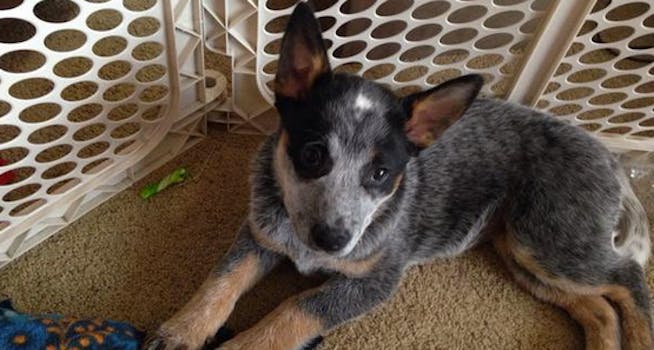 SPEP: Society for the Prevention of Evil Pets.

J.K. Rowling is concerned about animal rights, specifically about their right not to be named after evil characters from Harry Potter.

Excited fan Anna Musilli tweeted Rowling this morning with a picture of her adorable puppy.

To her surprise, Rowling immediately responded—with a hilarious suggestion to change the dog’s name.

[email protected]_musilli That dog is far too cute to be named Bellatrix. It's not too late to call her Luna, you know.

As every Potter fan can tell you, Rowling was taking tongue-in-cheek exception to Musilli naming her friend after the diabolical Bellatrix Lestrange. In the Harry Potter series, Lestrange is a Death Eater—meaning she was a prominent follower of the evil dark lord Voldemort.

Why would you name your sweet, smiling puppy after an evil sorceress? For starters, with her black coloring and the prominent white spot on her head, Musilli’s puppy bears a resemblance to Bellatrix, whose family surname was Black. In the films, a delightfully deranged Helena Bonham Carter played Bellatrix while sporting a white streak in her hair and dressing as though she’d just discovered the Hot Topic steampunk collection. Close enough.

And if you’re fond of villains, Bellatrix is pretty much as evil as it gets. She was easily Voldemort’s most devoted follower, utterly devoted to his genocidal ideals and committed to wiping out anyone standing in the way. Highlights from Bellatrix’s storied career include:

That said, Bellatrix has so much fun being evil it’s easy to understand why a fan might be drawn to her. And even Rowling herself, when she wrote recently about her feelings on resident HP bad boy Draco Malfoy, admitted she can see the appeal of the villains.

For her part, Musilli was thrilled—and she had a surprise of her own; Luna, the bright and quirky Ravenclaw student who stole everyone’s hearts in the last half of the series, had already contributed the dog’s middle name.

It’s nice to note today’s exchange as an example of Rowling continuing to own Twitter interactions while working on the upcoming trilogy adaptation of Fantastic Beasts and Where to Find Them.

We look forward to many puppies boasting the name of Newt Scamander in our future.