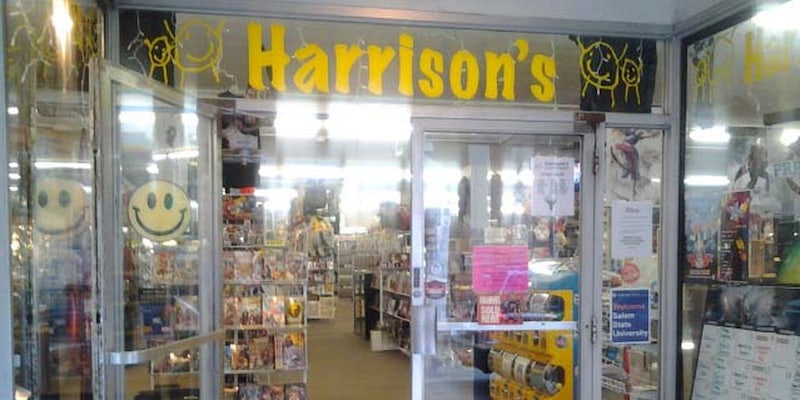 "I told Larry I was a rape survivor. He still refused to address the issue."

A woman in Salem, Mass., is claiming to have been fired from a local comics shop after she confronted the owner about employees calling a storage room the “rape room.”

Jennifer Williams detailed in a short series of tweets Tuesday night that she had been fired shortly after talking to the owner of Harrison’s Comics and Pop Culture Shop about her concerns.

Fyi, Harrison’s Comics and Collectibles in Salem MA has a “rape room”, dubbed such by the owner’s friend Julian who is acting as manager.

Julian, who claims to be a lawyer in Salem, also came up to me and put his arm around me without my permission.

On Sunday I spoke to the owner about my concerns. I was off yesterday. Today I was fired.

Williams, who is a horror and fantasy writer, added that she had long been a comic book fan and had aspirations of becoming a writer:

I have loved comic books since I was a child. I grew up on X-Men and Swamp Thing. This sort of thing really breaks my heart and spirit.

It has always been a dream of mine to work in comics as a writer. I’ve done a little indie stuff but this is so discouraging.

When asked, Williams clarified what she thought “the rape room” was:

@The_T113 It’s one of the back room used for storage. I have no idea why they call it a rape room. Didn’t dare ask.

Williams’ tweets gathered attention from around the geek Twittersphere. She elaborated further that she felt the owner had blown off her concerns:

@NathanialWCook THANK YOU. I told Larry I was a rape survivor. He still refused to address the issue. @HARRISONSCOMICS

Harrison’s has three locations in New England—a store and warehouse in Massachusetts and another in New Hampshire. Though the comics shop could not be reached for comment at press time, a representative of the store did take to Twitter.

Those who have know us for years must realize that we do not condone this behavior.

I feel bad that she had to lash out this way. I have known her for many years and think of her as a friend.

Williams responded, as did some of her supporters:

@HARRISONSCOMICS Hey, Larry, instead of trying to backpedal out of my earshot how about you actually talk to me?

@HARRISONSCOMICS Your side of the story is that you knew about the rape room and when I came to you, you brushed it off.

@HARRISONSCOMICS You said you didn’t want to make waves and you were sure he was just joking.

Harrison’s is inviting people to go to the store and talk to him to hear his side of the story. Too bad he won’t talk to me.

Also, if this is really what your employee said, it’s 100% code for “She spoke up when I made a rape joke.” https://t.co/srsEI2zFjv

Williams claimed that she had tweeted about the existence of the “rape room” before she was fired, but the Daily Dot could not locate these tweets. It was not clear how long Williams worked for Harrison’s, or what other factors contributed to the firing.

Additionally, it wasn’t clear whether multiple employees were involved in dubbing the storage room a “rape room.” Williams claimed that the man who had “joked” about the issue followed her on Twitter:

The man who made the rape room joke just followed me on here. I’ve blocked him but I am still really upset he did this.

Though details were sketchy, Williams’ alleged experiences echoed those of many women who have found themselves ostracized when dealing with real-life comics shops. In 2012 comic artist Kate Leth described her negative experiences trying to buy comics in local stores, and last year comic artist Noelle Stevenson opened up about her own discomfort in real-life comics spaces.

Williams stated earlier today that she had given a statement to police about the incident.