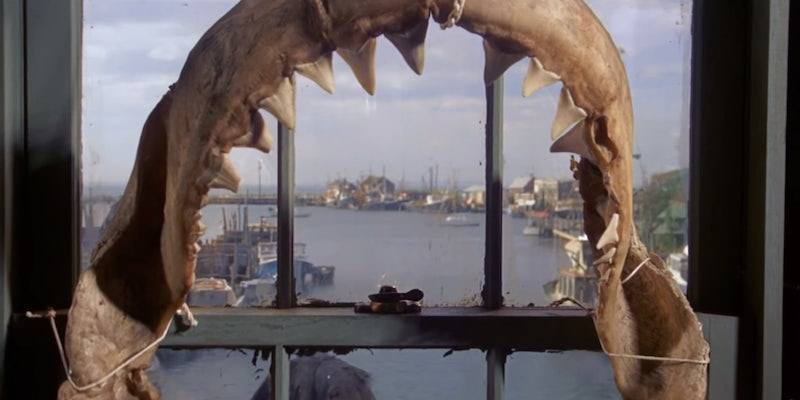 Believe it or not, the summer blockbuster officially turns middle-aged tomorrow, on the 40th anniversary of the release of Jaws. The film made household names out of Spielberg and John Williams, forever put sharks on the public’s most-feared animal list, and turned macabre speeches from grizzled old war veterans into an Olympic sport.

Jaws is still the best creature movie ever made, bar none, and among the best horror movies, equally character-driven and suspenseful. The shark, in reality a one-sided model nicknamed Bruce, isn’t actually seen until the film’s 2/3 mark, prompting Roy Scheider to utter the famous words, “You’re gonna need a bigger boat.”

The film’s long runtime and lack of instant shark delivery can sometimes create yawns from younger viewers accustomed to much-faster scares, which is why we got excited over the fan trailer Las Vegas video editor Robert Jones just made to celebrate Jaws‘ birthday. Taking his cues from the famous soundtrack, Jones delivers something that falls in between a shiver-inducing trailer and a condensed version of the entire film, with a focus on just how terrifying things get once the leaky old boat Orca finally goes head to head with an enormous Great White.

It seems three minutes are all you need to illustrate why a film is a cultural icon—and it managed it all without even quoting the U.S.S. Indianapolis monologue.