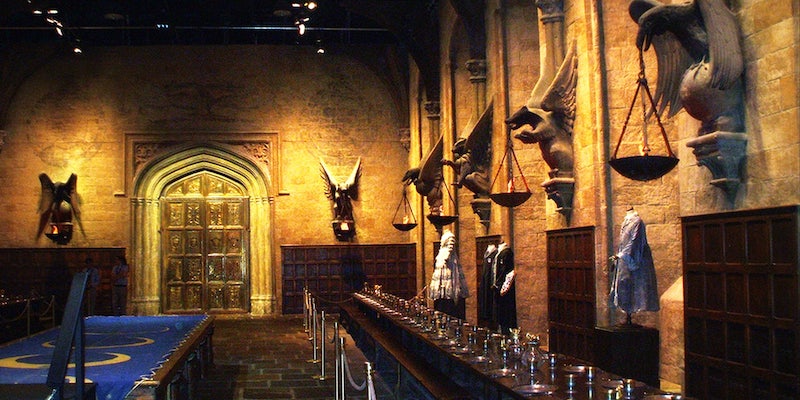 James has seven years to look forward to in the greatest school on earth—but it's not the Hogwarts we knew.

Today J.K. Rowling was ecstatic to announce to the world that Harry Potter‘s firstborn son, James, had finally gotten his Hogwarts letter:

I'm in Edinburgh, so could somebody at King's Cross wish James S Potter good luck for me? He's starting at Hogwarts today. #BackToHogwarts

Her Majesty wasted no time in livetweeting updates from Hogsmeade (she apparently had someone on the ground connected to a firechat!) to let us know that James had been welcomed into her favorite Hogwarts house:

But the Hogwarts of 2015 looks decidedly different than the Hogwarts of 1998, when his father, a.k.a. the Boy Who Lived, defeated Voldemort on the grounds of the School of Witchcraft and Wizardry. The world has changed a great deal since the ’90s, and the Wizarding World is no exception.

We took the liberty of imaging some of the changes we think could have reached James Potter’s magical generation by the time he sets foot in the door:

The students have spell phones

Muggles are used to being within a phone call of each other, and muggle students at Hogwarts have mostly been raised using mobile phones from an early age. When their kids’ Hogwarts letters came, the parents probably didn’t like having all contact cut off with their kids save for snail mail and owl post. Though Hogwarts has put its foot down about allowing cell phones in the building, Headmistress McGonagall relented in the early 2000s after numerous complaints from parents, allowing Muggle students to convene in a designated area to call their family and friends outside of classes.

Initially, the other students bullied the Muggle-borns for their clunky-looking phones. But as more students from wizard families learned from their friends how they worked, more phones started showing up on school grounds. Then, in 2004, a young wizard named Stefan De Pomme invented the spell phone, an entirely unique magical device that quickly became ubiquitous at Hogwarts.

Wizards have apps, too

Over time, spell phones have become a regular part of daily Wizard life. James and his friends can scribe their friends, talk to them on Flutter, play games on Snitch, and send pics on Hexagram. Upperclassmen can connect using the popular Wanderful dating app, or share their Weird Sisters fanfic on Witchpad. Students can access Reducio‘d versions of Hogwarts: A History and other books from their spell phones, and Pensieves are a thing of the past thanks to the Accio archive, which conveniently stores about 1,000 of your memories in the cloud until you need to access them again.

And, of course, with the Yowler app, parents can still send their kids Howlers—through a simple text. It’s a great time for Wizard parents to be alive.

Despite Google Earth’s best satellites, images beamed back to Earth only show thick dense forests over Hogwarts and Hogsmeade, while plenty of Muggle drone owners have been baffled when otherwise perfectly functional drones simply fell out of the sky. For some reason, a high number of these “dead drones” occurred last summer around the Patagonian Desert (the host location of the Quidditch World Cup).

Wizard Hackers will be in high demand

Despite the British government’s best efforts, the only thing that’s been consistently proven to keep Muggle hackers out and all their secrets in are secure magical wards placed over their computers and servers. Putting these in place has proven a tricky but lucrative career for the few daring Wizards who agree to work with Her Majesty’s various agencies to put these safeguards in place. But Kingsley Shacklebolt’s Ministry of Magic has a new problem on its hands: A growing number of Wizards from Muggle backgrounds have taken to warding off the gadgets of relatives and friends from prying government agencies.

Fortunately for Shacklebolt and the state of inter-governmental relations, MI5 and MI6 have yet to pinpoint the source of their inability to track certain computers and other devices, but it’s only a matter of time.

Quidditch players will have RFID tags

These controversial implements of Muggle technology will be all the rage with pro Quidditch teams who hook them up to spell phones to record all kinds of data about their players’ abilities and performance levels. But they’ll be banned at Hogwarts, along with GPS, sonar, and other devices that make it easier to spot the Snitch.

James and his friends can relax in the Great Common Room

After the Battle of Hogwarts, McGonagall ordered the charred remains of the Room of Requirement to be transformed into a new open common area where all students, regardless of house or age level, can come and relax. “Really, I can’t think why we never had one before,” McGonagall was heard to say at the dedication ceremony.

After the defeat of the Death Eaters, Hogwarts made a rule that at least one term of Muggle Studies would be a requirement for every student at Hogwarts. In the 17 years since, numerous members of Slytherin house have become surprisingly enthusiastic about the subject. Now thought of as a proponent of Muggle cunning and ingenuity, Slytherin still incurs rumors that perhaps its members are just attempting to know and understand their enemies. Whatever their motivations, Slytherin upperclassmen are all too eager to help leading classes on subjects ranging from Muggle pop culture (what Slytherin doesn’t love Fall Out Boy?) to computing.

Controversially, the portrait of Slytherin student Vincent Crabbe, who fought for the Death Eaters in the Battle of Hogwarts, was included among the portraits of those students who died fighting in Dumbledore’s Army. Although it took some time for students to adjust to the idea, Crabbe’s portrait now more or less fits in among the other portraits, and can occasionally be seen helping Slytherins with their homework in the library.

Of course, Fred Weasley’s portrait is the most popular of all, and he and Peeves still conspire to put backfiring jinxes in McGonagall’s office chair.

And so will politics in the outside world

Anti-Immigration sentiment is on the rise

Much as the U.K. as a whole has been beset by rising concerns over immigration, Minister Shacklebolt himself has been plagued with criticisms from conservative Purebloods arguing that he’s too lax on allowing non-British students to “infiltrate” Hogwarts. Along with cries for Shacklebolt himself to resign, James can expect to see protesters along Platform 9 and 3/4 on his first day of school, targeting those students who weren’t lucky to have been born in Britain or Ireland.

With the demise of parchment news like The Daily Prophet, wizarding computing devices, known as floopads after the floo powder they’ve largely replaced, have become popular as well. Between floopads and spell phones, owl post is growing less and less common these days. Additionally, a growing number of Beast Rights advocates argue that Owl Post is inhumane. Though James will probably find they make good pets, they may not be delivering his mail for too much longer.

Wizard Starbucks is a thing

Given that the first Starbucks was invented by a very tired Seattle wizard, it’s hardly a surprise that the only menu in the Diagon Alley Starbucks is the Secret Menu.

And the Butterbeer frappucino is so good James almost wishes Muggles could try it.

Perhaps one day, we will.

But that’s another story, for another day.

Correction: This story was updated to remove an inaccuracy about Professor Burbage.