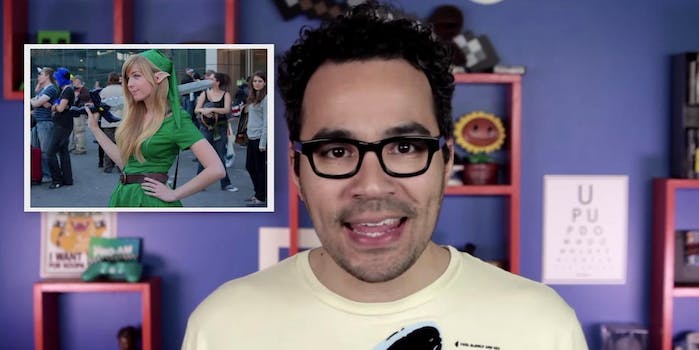 Why Link from The Legend of Zelda could be a girl

Gender in the classic Nintendo game? It's more fluid than you think.

Could Link, the famous hero from The Legend of Zelda, be a girl?

Many noble gamers have tried to genderswap the hero in the past, including one dad who cracked the game in order to create a female Link as a heroine for his game-loving daughter. Now, the latest episode of PBS Digital’s Game Show is arguing that it actually shouldn’t be a big deal to make one of Nintendo‘s most popular characters female in the next Zelda release.

At last year’s E3 conference, artistic depictions of an androgynous/femme Link for the upcoming Wii U Zelda release briefly caused controversy and excitement before the creators backpedaled and clarified that, no, Link was still a boy. As Game Show host Jamin Warren points out, although Nintendo quickly quashed the hopes of a female Link for the Wii U release, the conversation hasn’t gone away.

So what would the Zelda ‘verse be like if the next Link were a girl? Actually, not really different at all. Warren lays it out for us.

As the episode points out, the main reason Link could easily be cast as a girl is that Link isn’t actually a character name, but rather a title for the many different unnamed playable heroes at the game’s center. Thus far, they’ve all looked similar and been male, but that character could easily be a girl next time around.

Think of it like Thor’s hammer: Anyone strong enough to pick it up can take over the role of the Norse god.

Of course, it doesn’t take particular strength to be Link: just cunning and skill and, oh, yeah, being the reincarnation of the original Link. And we all know karma isn’t really a stickler about gender roles.

Maybe now that the idea of Link as a girl is growing more popular, Nintendo will be less picky about our hero’s gender.