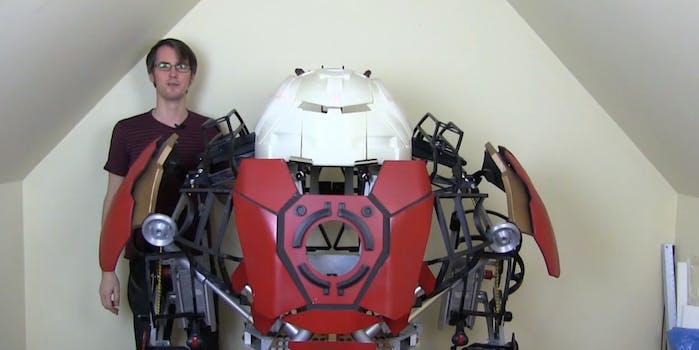 This Iron Man fan will be able to take on the Hulk when he completes his latest project.

It’s hard to miss Iron Man’s Hulkbuster armor in the latest trailers for Avengers: Age of Ultron. While watching the armor in action against the Hulk on screen is amazing, James Bruton is showing us it can be even more impressive in person.

With the help of a 3D printer, Bruton is constructing his own functional Hulkbuster armor. The armor is wearable and wi-fi enabled. Bruton started work on the intricate cosplay in April 2014 and is still building it. He documents each step of the project on his website and through a series of YouTube videos. In the videos you can watch as Bruton builds the suit, tries it on, and tests it. He has currently shared 24 videos about the project, the latest of which was posted Tuesday.

Watch the whole Hulkbuster playlist below and learn more about the project on Bruton’s website, where you can see other past projects he’s tackled, such as Iron Man’s mark VI armor.