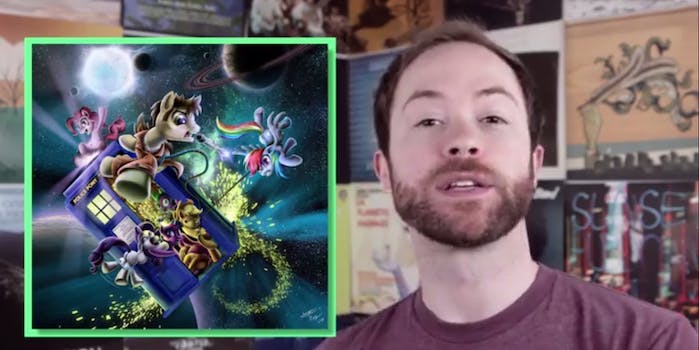 PBS imagines a future for fandom that’s already a reality

Idea Channel's predictions for the possibilities of fandom are easy to swallow—probably because they're already happening.

It’s no secret that lately PBS Digital has had its eye on fandom and its many possibilities. Earlier this week, the YouTube arm of the beloved public television network announced a webseries collaboration with Vlogbrother-offshoot Pemberley Digital that catered directly to Nerdfighters and fans of the Lizzie Bennet Diaries.

As part of a cross-network challenge to discuss the future, PBS’s The Idea Channel did a special segment on what it sees as the three main possibilities for fandom. What’s really interesting, though, is not the groundbreaking ideas that the show suggests, but rather their lack of novelty. All of the things that the Idea Channel posits as future possibilities are already well underway in the present.

According to host Mike Rugnetta, there are three significant possibilities for the future of fandom:

1) Fandoms could control the media they celebrate. The potential examples Rugnetta uses are fans influencing the direction of shows and creative properties. As the segment points out, we’re already seeing this, from Bioware issuing a new ending for Mass Effect 3 because fans hated the initial one so much, to #sixseasonsandamovie and the Community fandom agitating for Dan Harmon to be re-hired as showrunner for his own beloved fandom property.

But there’s another more practical aspect of fans controlling properties that Rugnetta leaves out. Many fans directly gain creative control over the properties they love. Longtime fandom creator Doris Egan became an executive producer for House, Smallville, and other notable works with huge fandom followings of their own. Steven Moffat graduated from eager Doctor Who fanboy to Doctor Who showrunner. And look who just stepped into the shoes of the Doctor: Peter Capaldi, a brilliant Emmy-award-winning writer and comedian in his own right who happens to be a die-hard, obsessive fan of the franchise himself.

Creative properties are also increasingly seeing a sort of cross-pollination from fans becoming creators. John Green, Hank Green, Lev Grossman, Rainbow Rowell, and Cassandra Clare are just a few of the many Harry Potter fans who went on to have professional careers that were directly influenced by their time and their connection to the Harry Potter fandom itself, and who continue to be close to the fandom. Meanwhile, Twilight hatched an entire cottage publishing industry so Twilight fans could publish their Twilight fanfiction as original romance, inadvertently giving rise to the Fifty Shades phenomenon and an entire new genre in the process—the New Adult romances that currently line the shelves of your nearest bookstore.

More and more, the line between fans and creators is growing thinner. In many cases, it’s hard to say where influence leaves off and creation begins.

2) Fans could help challenge and even contribute to copyright law.

Again, as Rugnetta points out, this is already happening—most notably through the legal advocacy of the Organization for Transformative Works. A non-profit fandom organization started in 2008, the goal of the OTW is to preserve and protect fanwork, which also means defending it from restrictive copyright. The OTW’s legal advocacy team frequently advises the Library of Congress on copyright law, and also works to defend and give advice to fans who are facing copyright issues.

Additionally, visible fan campaigns against unfair takedown requests help raise corporate awareness and understanding of Fair Use law. One notable example is the successful campaign waged by creator Jonathan McIntosh and fans on behalf of the famous mashup ‘Buffy vs Edward’ after Twilight rights-holder Lionsgate repeatedly tried to have it removed from YouTube.

Idea Channel thinks that this could hapen one of two ways:

a) by politics becoming more about building “fandoms,” like what has essentially become the Ron Paul fandom, or

b) by fandom itself becoming more invested in politics and social movements.

Again, a) and b) are already well underway—and in fact this is a “future” explicitly predicted by noted academic Henry Jenkins in his 2006 work Convergence Culture. Jenkins noted then that fandom was steadily turning grassroots political and social efforts into cornerstones of fandom activity.  In the mid-2000s, the LiveJournal fanfic community had a long-running annual Valentine’s Day fan drive for RAINN. After the 2010 Haiti earthquake, the Harry Potter fandom raised $115,000 for relief efforts. Supernatural star Misha Collins‘s massive fanbase has similarly raised thousands for his Random Acts charity campaigns,while the Vlogbrothers’ Nerdfighters movement raises thousands every year for the annual YouTube charity fundraiser Project For Awesome. Then there’s the explicitly political Harry Potter Alliance, which frequently joins forces with the Nerdfighters movement, most notably to get out the vote in the last presidential election.

Meanwhile, the real future of fandom and politics might be an expansion of what political activism means. On Tumblr, rather than “slacktivism,” the term “social justice warrior” has become a buzzword to describe the defiantly progressive attitudes of Tumblr’s largely fandom-based communities. These include members of fandom who are explicitly bringing their politics into the entertainment industry and combining their desire for more representation, social progress, and diversity with the creative properties they love.

Perhaps the best example of this is the Racebending movement, which started as a massive protest within the fanbase for Avatar: the Last Airbender against M. Night Shyamalan’s inexplicably whitewashed casting calls for the film adaptation of the popular Nickelodeon animated series. While the movie flopped and received horrible reviews from critics, Racebending went on to become a noted media watchdog group that urges progressive depictions of characters and groups within media. Another example is the ongoing, pro-active war being waged over the issue of women participating in geek culture. As women, fans of color, and other minorities fight for equal treatment in the pages of their favorite comics and the graphics of their favorite gaming franchise, it’s harder to see fandom itself as extricable from the political movements happening in Washington.

“Am I saying that Nerdfighteria is the future of politics?” Rugnetta asks. “I might be!”

Watch the whole thing below and let us know what you think.

Disclosure: The writer of this article has served on the Development and Membership Committee of the Organization for Transformative Works since 2012. The committee is responsible for outreach, promotion, and fundraising for the OTW both within fandom and outside of it.