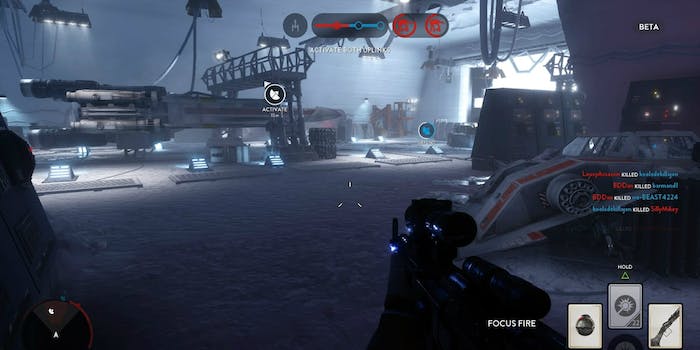 Get prepared to fight on Hoth, Tatooine and the rocky world of Sullust.

You are about to have five days to enjoy one of the most authentic Star Wars video game experiences ever—for free.

Beginning on Thursday, a public beta for Star Wars Battlefront will be made available on the PC, PlayStation 4, and Xbox One. Early access codes for the beta went out on Tuesday, and we’ve already had a chance to put in quite a few hours.

Everyone who jumps into tomorrow’s open Battlefront beta is in for a treat. There are a few things you can do to prepare, and to get the most of your beta experience.

In order to access Battlefront’s online features, regardless what platform you’re playing on, you will need an account with Electronic Arts.

You can establish your EA account here, on the Origin store, if you don’t already have one. You can’t miss the “Register” button. It’s located directly beneath the clock at the top of the screen that’s counting down to the beginning of the Battlefront beta.

2. Keep an eye out for the Star Wars Battlefront Companion

On Oct. 1, the Battlefront blog announced a mobile app called the Star Wars Battlefront Companion. The app itself will not appear on the App Store or Google Play until we’re closer to the Nov. 17 release date for Battlefront.

But starting tomorrow you’ll be able to test some of the companion’s features, when a browser-based version is available on StarWarsBattlefront.com during the open beta.

The companion includes a mini-game called Base Command that uses Star Cards, or Battlefront’s customization items, as the basis of the play mechanics. Winning games of Base Command also earns you credits that you can spend on unlocking those weapons and gear for your soldier in Battlefront.

3. Brief yourself on the beta’s game modes

When Battlefront is released in November it will feature seven multiplayer modes and three modes built for one or two players called Missions. When the beta begins, however, you will only have access to three modes: Survival Mission, Drop Zone, and Walker Assault.

In Battlefront you earn points at the end of each match toward leveling up your character. The points also translate into Galactic Credits. The higher your level, the more gear you unlock for purchase. Again, you use the Credits to purchase the gear you’ve unlocked.

Before stepping into the 20-versus-20 Walker Assault mode, it behooves you to play some Survival Mission and Drop Zone to earn some experience and some credits, so that you have gear and weapons unlocked before stepping into the Battle of Hoth. That will also let you get a handle on how the game feels before facing human opponents.

Survival Mission is a wave-based mode for one or two players. You are a Rebel commando who’s crash-landed on Tatooine and need to buy the Rebel fleet time to extract you from the planet.

The victory conditions are simple: Don’t die. During the mission, Admiral Ackbar will send resource pods to help you. The pods contain power-ups, like turrets you can set up to defend yourself. The anti-vehicle turrets in particular will come in handy, for when you inevitably get attacked by Imperial Scout Walkers.

Drop Zone is 8-versus-8 multiplayer, and in the beta takes place on the rocky world of Sullust (a location we’ve never seen before in a Star Wars game). The mission objective is to take and hold the escape pods falling into the area.

There are no vehicles in this mode, only infantry. Whichever team has claimed the most pods within the 10-minute time limit wins.

Be warned that Drop Zone takes place on comparatively small maps, so a full 8v8 game turns into close-quarters combat very quickly. Stick with your squad.

Walker Assault is 20v20, large-scale, combined-arms (i.e. infantry, armor, and air power) combat that the Battlefront series is best known for. Walker Assault is specifically a recreation of the Battle of Hoth from The Empire Strikes Back, where the Rebel Alliance desperately fights to hold off the invading Imperial Army to buy time for the evacuation of the Rebel base.

For the Rebels, the goal is to destroy two Imperial AT-ATs before they get in firing range of the shield generators. For the Empire, the goal is to defend the AT-ATs until they achieve the Imperial mission objective of destroying the base’s shields. There are two key things to understand about Walker Assault if you want to achieve victory. First, the Walker Assault is all about the uplinks. The Rebels use the uplinks to call in Y-Wing bombers, who attack the AT-ATs and make them vulnerable to attack by Rebel ground forces. It does not matter if every Rebel player in the match has a 10.0 kill/death ratio. They will still lose if they do not activate and hold the uplinks.

The odds are very much against the Rebels in Walker Assault. Time is on the Empire’s side—the AT-ATs are exceedingly difficult to take down, and their march toward the shield generators cannot be slowed, even when they are vulnerable and taking heavy fire.

The Rebels need to hold the uplinks for almost the entire match to even have a chance of destroying the AT-ATs. Second, the Power-ups can turn the tide of the fight. The blue icons hovering over the map are one-time-use upgrades. Some power-ups, like the one pictured above, can unlock gear like extra-powerful grenades and rocket launchers or portable shield generators. These power-ups can also grant access to the hero characters Luke Skywalker and Darth Vader.

Some power-ups are geared specifically toward vehicles, like X-Wing and A-Wing fighters and the T-47 airspeeder for the Rebels, and AT-ST scout walkers, TIE Fighters, and TIE Interceptors for the Empire.

Keep an eye out for these vehicle power-ups, in particular. During the brief periods when the AT-ATs are vulnerable to Rebel fire, having a pair of X-Wings pounding away at the Imperial armor can be a make-or-break proposition.

Good luck, and may the Force be with you.